A Dish of Spurs - The Border Reivers

This is the first of a trilogy of historical fiction books by Bob Low, based on the Scottish Borders. After his series on the Vikings and the Wars of Independence, not to mention the Romans, he has clearly got the bug for the Borders. The final book in the trilogy is already coming out this month. Bob is also a re-enactor and wargamer who used to play at my wargames club (GDWS) before he moved away. 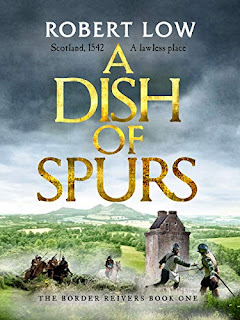 We are talking about the area on either side of the border between Scotland and England for those not familiar with the Scottish Borders. It was a region of mixed allegiances, where clans (Grayne is the Borders word) switched national sides depending largely on their family interests. It is described as a lawless land where violence and raiding were common, although both countries established a wardens system to regulate disputes. This book is set in the Debatable Land in 1542, a strip of land around Canonbie which both countries claimed until the border was settled in 1552.  It was dominated by one family, the Armstrongs.
Our hero in this book, although the hero might be pushing it, is the wonderfully named Batty Coalhouse. He is a one-armed mercenary who fought in the Italian Wars and gets involved in a local feud when commissioned to bring the murderer of the father of the book's heroine, Mintie Henderson to justice. This brings the family into conflict with the powerful Armstrong clan based at Hollows Tower. I won't spoil the story, but there are several sub-plots, including the kidnapping of Mary Queen of Scots, a baby at the time. This was a conflict with Henry VIII, known as 'The Rough Wooing' because Henry wanted Mary to marry his son Edward and so link the crowns. The author tends to drift off at a tangent on occasions when you just want the narrative to flow. However, other than that minor criticism this is another great read, and I have already downloaded the next in the series.
I should caution that this is not a story for the squeamish. If it ever gets to the screen, it will be 18 rated for violence alone! The Borders was not a wealthy area, so large castles were rare. Instead, the Lairds had tower houses, many of which can still be visited today. Even families of modest means would fortify their houses with thick walls and two stories, known as Bastel Houses. This is Smailholm, a good example of a Tower House. 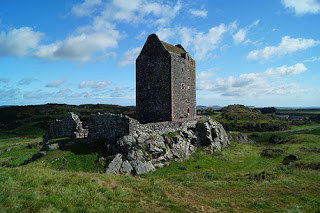 Despite staying not far from the Borders, it's not a period I have tackled seriously on the wargames table. The classic history is George MacDonald Fraser's The Steel Bonnets, which I found very hard going. Not what I expected from the author of the Flashman series. There are some excellent 28mm figures, and I used these below for the Tully horse in my Game of Thrones army, as they match the TV series's depiction very well. David Weinczok makes a good case for the Borders being the historical basis for the Riverlands in GoT. 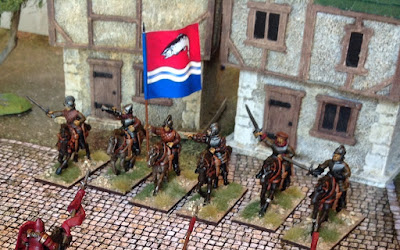 I have an English army of the period in 15mm, which includes border horse. So, onto the tabletop for a small game of Pikeman's Lament. The troop types in these rules don't really work well for this earlier period, but it provided a fun short game. 'Fat Henry', as he is called in this book, was sent packing! 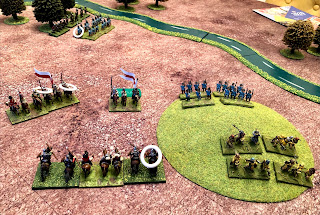 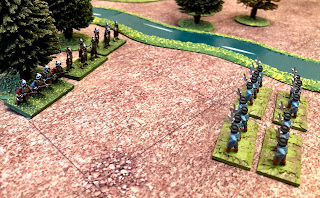 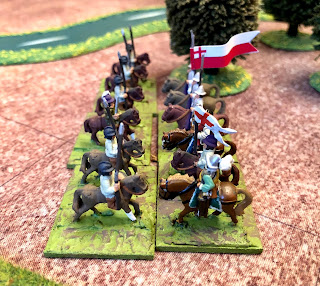