Happy New Year! Well, 2020 was certainly different. Precious little face to face gaming and no shows for me after York in February. We adapted with games over Zoom and other online offerings, but it hasn't been the same. The only plus side is that more figures got painted, books got read and the hobby seems in decent shape with folk rediscovering gaming in all its formats. Zoom games also allowed me to play with people on different continents, which was enjoyable.

On the painting front, I almost got to the bottom of the lead/plastic mountain, had I not got drawn into new projects, of which there have been many! I have largely finished the Turkish Army of WW2 in 15mm and made a start on the 28mm version. The big 15mm project was the War of 1812, albeit a couple of years after visiting the battlefields. In the smaller scales, I finished the India-Pakistan wars in 1/285th scale using GHQ models. I dabbled with fantasy, inspired by Oathmark and built a decent sized dwarf army, which can be used against my many Dark Ages armies under these rules. It also got me painting more figures from the Conan game, including the barbarians.

Earlier in the year, I finished off several projects including the 28mm Soviets (with some Romanians) and the Hungarians for Bolt Action Fortress Budapest. Another project stimulated by an overseas trip was the Zulu and Boer wars, this time in 10mm, to which I have added Afghans as additional opponents. I also managed some smaller 28mm projects with more Saxons, including Alfred and Aethelflaed, Viking shield maidens, Venetians for the Cretan War, Russ Druzhina and infantry, and 1848 Hungarians. I also added to the 20mm moderns with eastern European militias and Brits. I am a rubbish sailor, but that hasn't stopped me adding Ottoman ships to my Black Seas fleets.

For the new year, I am adding more Mongols to field at least a Saga force. My Netflix viewing includes the epic Ertugrul series, so that needs to get onto the tabletop. These are some heavy cavalry I finished basing this morning. The models are from Gripping Beast. 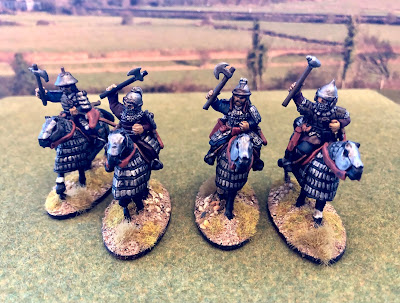 Next up will be 28mm Turkish WW2 infantry and support weapons for Bolt Action. I am converting these from Crusader Miniatures, French Dragon Portes. Other than bits and pieces that's it from the lead mountain, but new rules, books and hopefully travel (remember that!) will no doubt stimulate new projects.

On rules, playing over Zoom has meant keeping it simple. I have rediscovered Saga through the Age of Hannibal supplement, and for bigger games To the Strongest! remains my main ruleset. I got around to writing the Medieval Balkan army lists this year, which are now published in a nice looking booklet. Lion Rampant works very well over Zoom, and the new book on the Crusades may tempt me into new territory. Rebels and Patriots, also from Dan Mersey, has been a regular favourite, for 1848 and American wars. Sam Mustafa's games are always innovative, and I have played Rommel and Blucher a bit this year. I could well be tempted by the new edition of Lasalle.

For WW2 at the smaller scales, Blitzkrieg Commander is my go-to set, and I must dust down my Spanish Civil War armies to play the Libertad supplement. Cold War Commander is also due a new edition this year, which is just as well as my copy is past its best. In 28mm it remains Bolt Action, although I haven't played as many games this year as the number of units painted might justify. I have recently returned to Bloody Big Battles for the Greek-Turkish War and aim to play more games with this elegant rule set this year. Some wargame pals have got me interested in a Fistful of Lead, which is handy, along with Open Combat, for a quick game.

On the writing front, I have managed a record number of blog posts (134) this year, aiming at two a week. However, I only managed a couple of journal articles, and my book project could have moved a lot faster. I have just past 50,000 words, and I am filling in with research notes, thankfully done before lockdown. My semi-retirement has not freed up as much time as I had hoped for hobby writing. When I spend a day writing policy papers, painting and gaming is a more attractive evening activity.

Travel, or the lack of it, was the biggest downside of the year. I was fortunate to get to Sweden just before lockdown on a work trip, which may generate a project or two. I am giving some thought to trips in the early summer and beyond, and they almost always generate new projects.

Lockdown certainly increased my reading, and my to-read shelf is almost bare. I am currently working my way through a biography of Ataturk, and then it will be The Russo-Turkish War of 1768. At the same time, I have several WW2 tomes to work through as research for my own book.

So, that's it for 2020 and my plans for 2021. The biggest step forward would be getting back to the wargame clubs I play at, and other face to face gaming, not to mention shows. Our hobby is all said and done a sociable pastime, best enjoyed in good company.