Victory at Sea - WW2 in the Eastern Mediterranean

I am not a big player of naval wargames, although Warlord's Cruel Seas and Black Seas has got me interested. Having done land and air for my Turkish WW2 project, it was time to look at the naval aspects. David Hobb's new book on naval air warfare in the Mediterranean helped spark my interest.

The Turkish Navy suffered most of all from the financial restrictions placed on the new republic. A British naval attaché reported in 1937 that: “Judged by the standards of modern navies, however small, the condition of the fleet is far from satisfactory”. He suggested that they had not been updated since the First World War (which wasn't quite correct) and “were defenceless against air attack”. The main naval base was Gölcük in the Sea of Marmara.

The modest budget focused on the Dardanelles' defence, backed up by a mobile force led by the First World War battlecruiser Yavuz (ex Goeben) and four destroyers. The story of the Goeben escaping the British Fleet is well told by Dan Van der Vat in his book, 'The Ship that Changed the World’. His essential thesis is that by embroiling Turkey into World War 1, the war lasted for two years longer than it might otherwise have done.

The fleet did have some modern destroyers and submarines built in Italy. This may appear surprising, but in 1928 there was a peace treaty with the Italians that included financial guarantees for ships built in Italian yards. Turkish officers were also trained in Italy during this period. There was a ten-year plan to modernise the navy, and ships were ordered from Britain and Germany, although not delivered because of the outbreak of war. The British did deliver two destroyers and ten MTBs during the war.

So, how to model and game this. Having enjoyed the simplicity of Warlord's recent naval games, my first stop was their new offering, Victory at Sea. The free set of basic rules in Wargames Illustrated looked very playable. However, I just don't like the ship models on their clunky resin bases. Turning to my rules shelf, I found a set of rules called Victory at Sea. It turns out these were the original rules by the same author, published in 2007 by Mongoose. They have been tweaked a bit for the Warlord offering but are essentially the same mechanisms. I assume Warlord bought the rights as it isn't on the Mongoose website any more. 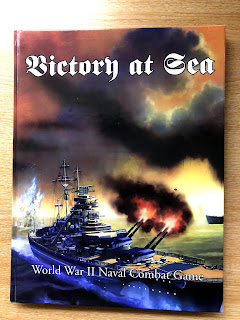 Freed from the constraints of Warlord models, I decided to go for Navwar's 1/3000 ships. Old school ordering system, but they arrived quickly.
I did the Turkish fleet first with the Yavuz, two destroyers and two submarines. The Atilay class were German U-Boats. 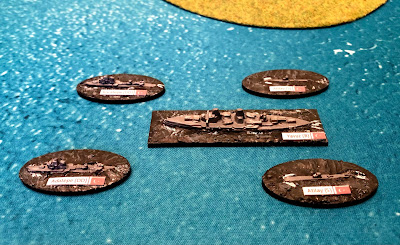 Then some Allies in the form of elements of the Royal Navy's Mediterranean fleet. 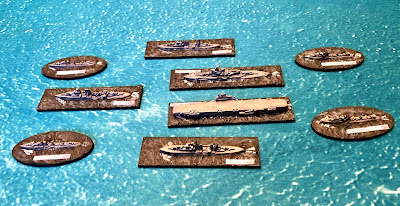 And finally, the enemy, the Italian fleet. 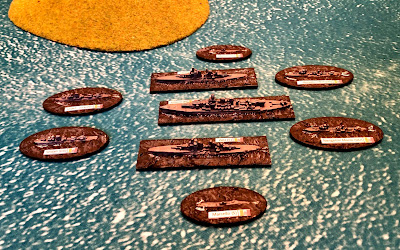 That will do for now. The original rules are in hardback, but the paper quality is poor, and the binding isn't likely to last long. There are also limited ship types, although it's not difficult to work them out using the trusty Ian Allan ships of WW2 series. So, I might play the new rules without the models and make my own cards.
The original rules played pretty well in a quick test game. Sadly, the Yavuz didn't last long. The Italian Littorio battleship's 15" guns ranged in pretty quickly, and it was crippled before even denting the Littorio. British cruisers sailed to the rescue, and with the help of much smoke, covered a retreat. I think we will need the Warspite or Illustrious to tackle the Littorio.