March on the Drina WW1

I am not a big board game player, but I can be tempted by a Balkan based game. I signed up for this game on Kickstarter because it meets that criteria, and it also appeared to be a relatively simple game mechanism. The last board game I bought on the Serbia campaign of WW1 was ridiculously complex, although the map is very useful. This game published by Princeps Games is certainly not complex. 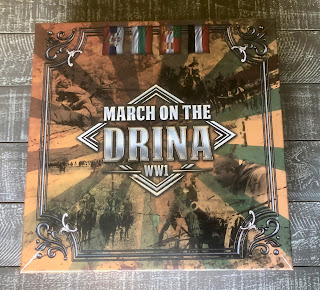 The game covered the opening campaign of WW1 when Austro-Hungarian troops crossed the Drina River to invade Serbia. It then moves in four-monthly turns through the war in the Balkans until the final offensive in 1918, which knocked Bulgaria and then Austro-Hungary out of the war. A total of fourteen turns that are represented by a desk calendar you turn over.

The map is printed on very solid boards - no light card foldovers here. The map is perhaps a little stylised, but it is easy to follow and divided into hexes. It covers the main opponents of Serbia in the war. Montenegro is treated as being part of Serbia, which although very close allies, isn't really accurate. The map also doesn't allow for the Austro-Hungarian attack on Montenegro from the coast around their naval base at Cattaro (Kotor today). The game is for 2-4 players—one representing Serbia and the rest the opposing combatants - Austro-Hungary, Germany and Bulgaria. 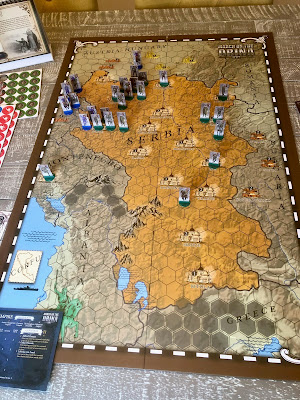 What is different about this game is that you get some very nice mounted card markers for the units instead of counters. It says that these represent 'armies', but as Serbia starts with ten infantry units and three cavalry units, it has to be less than that. They are pretty robust, and the artwork is excellent. 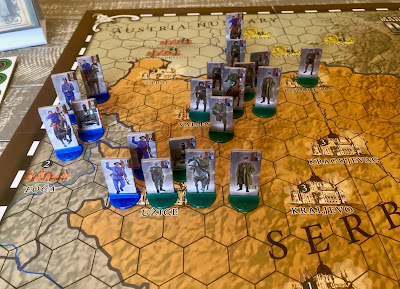 Other player aid materials are of equally high quality. There is a card for each country with the stats for their units and cards for the named generals. 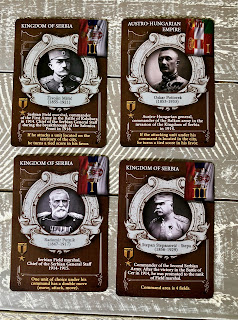 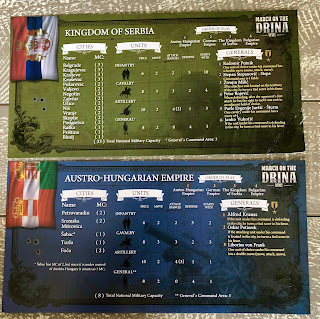 Movement is two or three hexes, including a hex if you want to attack an enemy unit. Artillery can't fire and move. The combat mechanism is straightforward. Just add up the units' strength and offensive value against the enemy's unit strength and defence value. The variable factor is provided by luck cards (+3 is the maximum) instead of dice. There are some variable factors based on the time period and the commander.

The calendar shows when reinforcements are due, with each unit having a price. You even get some nice currency counters.

And that is it. It could not be simpler, which I like. Although I suspect hardcore strategy board gamers might find it a little too simple. It's a fun game that can be played in full for over 3-4 hours. Some of the history is missing, but it handles the earlier campaigns fine.