The Galloway Hoard was discovered in 2014 at Balmaghie, Kirkcudbrightshire, which is in southwest Scotland. Deposited around 900AD, it is Scotland's earliest and one of the largest Viking-age hoards with over five kilos of silver bullion. It is the subject of a new exhibition at the National Museum of Scotland that I visited on Friday. What a joy to be able to visit places again!

What makes this hoard particularly special is the wide range of materials found and how they highlight the trade routes of the period - from Samarkhand to Skye. Martin Goldberg and Mary Davis have written a book that explains the items and their context and why the hoard gives us valuable insights into the period. 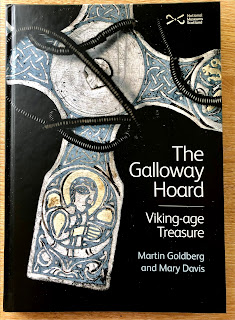 Hoards are typically wealth concealed to preserve it with the intention of recovering it later. The 10th century was a turbulent period, and Galloway was the subject of Viking raids and settlement.

The items in the hoard include arm rings, often given as gifts by leaders, as rewards for loyalty. This will be familiar to fans of Bernard Cornwell's 'Last Kingdom' books and TV series. 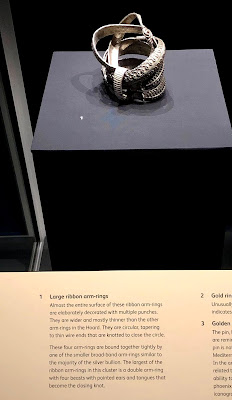 There are also silver ingots and hacksilver used as currency. Some of these have rune carvings, including the Anglo-Saxon name Eggbrect (Egbert). Silver could be brought from as far away as Samarkand to pay for furs and amber, although the most profitable purchases were slaves. 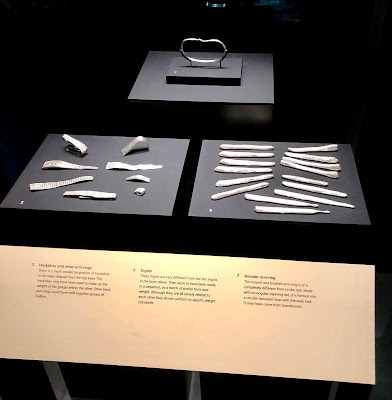 Perhaps the most striking piece is this silver cross. It is decorated in a distinctive Late Anglo-Saxon art style called Trewhiddle. 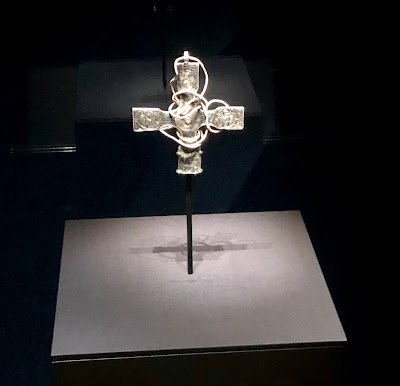 The ongoing analysis hopes to reveal more about the connections these items highlight across the Viking world. The exhibition goes on tour to Galloway in October and then Aberdeen. Well worth a look.