This is Jan Asmussen's study of the 1974 'invasion' or 'peace operation' depending on your point of view. This is primarily a diplomatic history based on British and US archival sources. 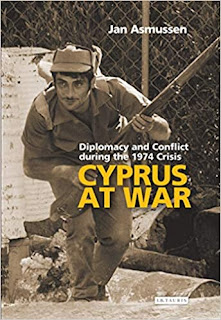 Cyprus had many different rulers over the centuries,, but only the Greeks settled in large numbers. In the 16th century, when the Ottomans captured the island, it settled Muslim farmers, eventually making up about 20% of the population. Under the Ottoman system, both communities primarily administered themselves. However, the growth of nationalism in the 19th century emphasised identities and a growing call from the Greek Cypriots for unification with Greece (Enosis). With only 20% of the population, a similar link to Turkey wasn't a practical option for the Turkish Cypriots. Even the call for a division of the island (Taksim) created problems as Turkish Cypriot communities were spread across the island.

In the 1950s, a violent struggle for Enosis began against the by then British rule, led by EOKA. This had turned into an inter-communal struggle by 1958, which was not resolved by independence in 1960. This led to a civil war in 1963/4 and the insertion of UN forces to protect Turkish Cypriot communities. Both sides developed their own armed militias. Turkey considered armed intervention twice in the 1960s when the Greek Cypriot government under Archbishop Makarios ignored the constitutional protections enjoyed by the Turkish Cypriot community. The USA headed off this intervention by threatening the withdrawal of US-supplied weapons.

The 1974 crisis was caused by a military coup inspired by the Greek Junta, which replaced Makarios with a former EOKA leader Sampson. This was not acceptable to the Turkish Cypriots or Turkey, who feared new attacks on their communities and so began preparations for an intervention.

The bulk of this study covers the various diplomatic efforts to find a peaceful outcome. Britain was a key player as it was a guarantor of the constitution and had two bases on the island. The USA was distracted by the Watergate crisis. Its primary focus was stopping the two NATO allies, Greece and Turkey, going to war, as well as keeping the Soviets out of the eastern Mediterranean. Greece was in some turmoil as the Junta was overthrown, and the first steps were taken towards a return to democracy. The diplomatic efforts were led by Jim Callaghan as Foreign Secretary, with Henry Kissinger intervening somewhat erratically.

The diplomatic history is complex and involves many meetings and two conferences in Geneva. Numerous solutions were proposed, but none were acceptable to either side. As a new outbreak of inter-communal violence was at least alleged, the Turks mobilised their 6 Army Corps at the port of Mersin for an invasion that began on 20 July. The military aspects of this are better covered by Ed Erickson and Mesut Uyar's book 'Phase Line Attila', which I reviewed here. It included an initial landing at Kyrenia in Northern Cyprus, which secured a beachhead. Further diplomatic attempts failed, and the Turks advanced again to occupy 37% of the island. Substantial population exchanges followed to create the two separate republics that exist to this day. The war displaced nearly 250,000 refugees.

Before the British archives were opened, there were many conspiracy theories, called the 'big and little lies' by the British Ambassador to Athens. Asmussen deals with these very well. I have read the same files in the National Archives, and I agree with his conclusions. Neither the UK nor the USA had prior knowledge of the coup, and they didn't collude with the Turkish invasion. In fact, the British Joint Intelligence Service reports make it clear that they thought the Turks would land at Famagusta. Many of these conspiracy theories persist, as a quick Google search demonstrates. Sadly, they also serve to prevent a serious discussion of local responsibilities for the crisis.

The war itself was a somewhat one-sided affair. The ill-equipped Cypriot National Guard fought well, but modern tanks and total air superiority made the outcome inevitable. 250 Turkish and 700 Greek soldiers were killed. Civilians killed and missing remain controversial, but it is likely to number over 2000. Both sides made extensive claims of war crimes and atrocities, which undoubtedly occurred.

For the wargamer, the actual conflict is not without interest, and I had the first go at it here, using Corps Commander in 10mm. I decided to do it properly in 6mm as I already have the Turkish and Greek armies of the period. I have painted the Turkish Marines and will start on the Cypriot National Guard next.

I am also planning to build Modern Bolt Action forces in 20mm. I have started to collect some vehicles, and infantry are on order. The Turks were pretty straightforward as they were equipped as the US army of the period. The Cypriot National Guard is more complex.
In addition to the actual conflict, there are lots of interesting what-ifs suggested by this book. The British were asked by the Turks to take part in a joint intervention after the coup under the terms of the treaty. They also considered intervening to stop the second Turkish advance, with the UN forces on the island. A wider Greece-Turkey conflict was considered likely and both forces mobilised in Thrace. Greece also mobilised a division in Crete to send to the island and asked the British and USA for air and naval cover. Then there is the possibility of a Soviet intervention, to add to their arms supplies to the Greek Cypriots. Plenty there for land, naval and air games.