The Warlord range of naval wargame rules has reinvigorated my enthusiasm for naval games, even if it hasn't improved my sailing skills. So I thought I would give galley warfare a go, as at least with oars, there is less chance of me sailing off the table edge, colliding with islands or even my own ships!

For reference works, I have several histories of the period but little about how galleys looked and fought. As always, a good starting point is the Osprey Vanguard series, and anything by Angus Konstam is worth reading. 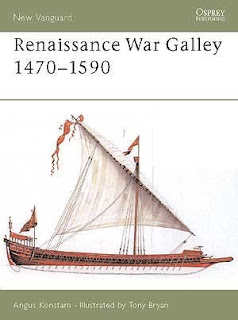 Angus starts with an overview of galley warfare and the renaissance developments, which focused on the introduction of ordnance. I hadn't appreciated just how large some of the cannons put of galleys were. The idea of the equivalent of Mons Meg in Edinburgh Castle on a slim wooden galley takes some imagination. The use of ordnance did vary amongst the maritime powers in the Mediterranean. I am primarily interested in Venice and the Ottoman Empire and Venice went for more firepower than the Ottomans.

Then we get a chapter on galley types, which in the main were pretty similar, although the Venetians used larger command galleys and converted merchant ships and then purpose-built Galleasses. There were lots of smaller galleys that were used for scouting and amphibious assaults. Fleet actions like Lepanto were rare, and the most common use of fleets was for amphibious assault and sieges or supporting them. As always in an Osprey, the book has plenty of illustrations and colour plates of the different types.

The chapter on logistics and organisation is interesting. They had a limited range, and so ports were vital for both sides. These supplied the fleets and provided a base for maintenance and shipbuilding. Finally, there is a chapter on tactics, which had moved away from manoeuvre and ramming towards firepower and boarding in this period.

This is an excellent introduction to galley warfare, just what I needed. I also dusted down my copy of the Osprey Campaign book, Lepanto 1571, although I plan to fight the later battles of the Cretan War.

For the tabletop, I like Black Sea rules, and Warlord does a couple of galley models. 1/700th looks about right for the small scale actions in the Adriatic, as I won't be refighting Lepanto. I have started with a couple of what Warlord call a large galley, which looks like the Spanish Lanterna in the Osprey, but it will do for the galleasses and similar. The models are in resin with metal masts. As with the Napoleonic Black Seas models, they go together well, and thankfully less sail. Although even the minimal rigging is too much for my large fingers.

I have painted these as Venetians. They are finished other than the all-important flags and banners coming from Spain (at the slow post-Brexit speed). I have six standard galleys primed to do next, and several smaller ships are on the way from Hagen Miniatures in Germany. 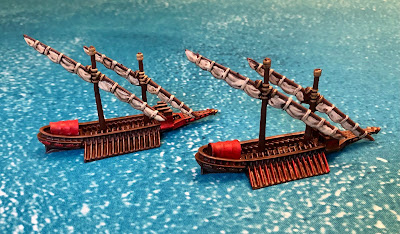