When I saw this new Osprey campaign volume, my first reaction was, do I really need another book on the Yugoslavia and Greece campaigns. However, since when did need become a requirement for buying books or wargame figures! 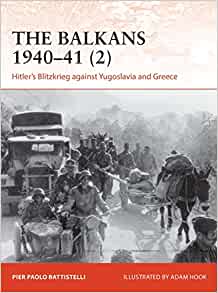 The format is the standard one for this series. Some background and a chronology followed by chapters on the opposing commanders, forces and plans. The meat of the book is a campaign narrative, which has plenty of photographs, some of which I haven't seen before. The real strength of this series is the excellent and plentiful operational maps.
The campaign is well understood, but the author has given more coverage than usual to two understated elements. Firstly, the brief Yugoslav invasion of Albania in conjunction with Greek forces on either side of Lake Ohrid. Events elsewhere undermined these efforts, but the Yugoslavs did make serious advances that panicked the Italians. As the first volume demonstrated, the Greek campaign was one of the sorriest Italian efforts during the war. Secondly, the German attacks on the Metaxas Line, which initially ground to a halt. This book describes the attacks on the individual forts, which thwarted the German plan to break through the Rupel defences.
The Commonwealth intervention was mainly an Australian and New Zealand venture, at least as far as the front line fighting units were concerned. This aspect of the campaign has been covered extensively, and there is little new here, other than plenty of photos from New Zealand based Turnbull Library. I have walked the Platamon and Pinios Gorge battlefields, and the contoured map highlights the challenges faced by Panzer-Regiment 3 and the 6th Gebirgs-Division.
The final chapter briefly covers the battlefields today, which is very useful for visitors. I agree the two museums in Athens and Thessaloniki are well worth visiting. The Rupel Fort site is described as 'partly open'. It has some odd opening hours, which I found particularly irritating having made an effort to get up there. You can't even view the monument because it is inside a modern Greek military base.
I have all the armies for these campaigns in 28mm and 15mm. This book is full of interesting scenarios suitable for the tabletop, and is a good starting point for those embarking on such a project.
Posted by Balkandave at 08:26