Eagles in the Dust - Adrianople 378

This book is Adrian Coombs-Hoar's study of the Roman defeat to the Goths at Adrianople on 9 August AD 378. I will be visiting Edirne (the modern name for Adrianople) in a few weeks, so I thought now would be a good time to improve my understanding of the battle. 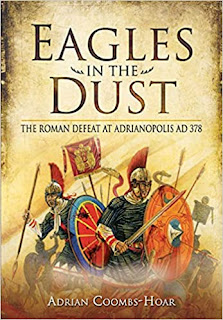 One of the challenges in writing a book about a single ancient battle with limited sources is finding enough words to justify a book. So, the author does what most others do and gives us a history of the Goths and the Roman Empire in the period up the battle. However, the author hasn't overdone this, and we get a concise explanation of the preceding events.

The Romans had reasonable relations with the Goths before 367, and Gothic troops could regularly be found in Roman armies. Emperor Valens had campaigned against them after they provided troops to the usurper Procopius, but after three indecisive campaigns, they signed a peace treaty. Valens had one eye over his shoulder to the actions of the Sassanids in Armenia. The author argues that this is the key to understanding the battle as Roman resources were divided. He also argues that the death of Valentinian in the West meant that Valens lost his valuable advice and approval for his actions.

The Goths were themselves under pressure from the growing might of the Huns. Valens agreed to several Gothic tribes crossing the Danube and settling in Thrace. Not only would they economically boost the region, but they would provide cavalry for his campaigns in the east. However, the Roman commanders abused the Goths, even attempting to murder their leaders, and they rebelled. The indecisive Battle of Willows failed to crush the revolt, and Valens was forced to bring an army to Thrace.

There is some evidence that the Gothic leader Fritigern was close to reaching an agreement with Valens that would have returned matters to the status quo. This may be one explanation for some of Valens military decisions on the day. Either way, a battle developed between the Romans and the Gothic wagon camp. The returning Gothic cavalry tipped the battle their way, and by nightfall, two-thirds of the Roman army, including Valens, had been killed, with the remainder fleeing back to Adrianople. The city fought off a subsequent assault by the Goths, who went off to ravage easier targets across the Balkans.

Given my trip, I was particularly interested in the chapter on the battle's location. The most popular place is the modern village of Muratcali, ten miles northeast of Edirne. It meets many of the descriptions in the sources, but so do other sites. Short of a lucky archaeological find, we are unlikely to resolve this. Not least because earthquakes over the centuries may have changed the terrain.

I also have Kulikowski and MacDowall's books on this period, which, together with this book, make up a decent resource if I have time to visit the likely sites. The new Balkan Wars museum is my first priority.

I have both armies for a refight. However, my Late Roman army is 28mm, and my Goths are 15mm. So no tabletop refight this week. 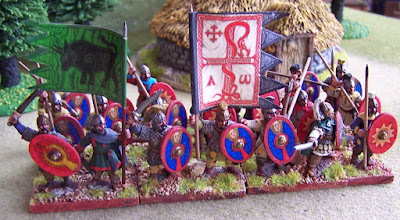