On the Borderlands of Great Empires - Transylvanian Armies 1541-1613

This is Florin Nicolae Ardelean's new book for Helion's Retinue to Regiment series on the armies of Transylvania 1541-1613. This is an Osprey style book, well illustrated, including colour plates. 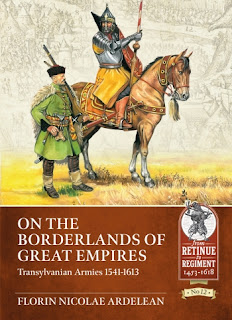 Transylvania during this period was a borderland caught between the Hapsburgs and the Ottomans. Its rulers shifted their allegiances, depending on the shifting balance of power between the two empires. It also bordered Poland to the north and Wallachia and Moldovia to the south-east.

The Battle of Mohacs (1526) resulted in the fall of the Hungarian kingdom, completed with the capture of Buda in 1541. This defeat created the space for the Transylvanian Principality, albeit under Ottoman suzerainty. Rulers were, in theory, elected by the Transylvanian estates and then approved by the Ottomans. They paid an annual tribute and had an obligation to send troops when the Sultan requested them. The author takes us through the complex ethnic structure of the principality, the governance structures and the early rulers.

This complex structure is reflected in the military organisation. These included the nobility and their private forces. While the great nobles could afford heavily armoured horsemen, most Transylvanian nobles were light cavalry. Travellers of the period noted the similarity with Turkish cavalry of the period. These were of varying quality, and like other states of the period, mercenaries were becoming more common. The Szekely had provided border troops for the Hungarian army in return for privileged status. These traditional freedoms were gradually lost as the border changed, but they still played an important role in internal and external conflicts. Mostly German colonists, called Saxons, had similar privileges, although they served primarily as infantry. The Hajdud specialised in irregular warfare, and they also served as local garrisons receiving wages. They became an essential part of Transylvanian armies, primarily as infantry. The book has colour plates of the main troop types, although I would have preferred to see more about local troops than the better known standard mercenary types.

This was when fortifications of the trace italienne architecture gave something of an advantage to the defence. Transylvania had several key fortresses used to defend the border and as a base for raiding. Lipova even had a garrison of 300 Scottish mercenaries, who probably felt quite at home in the hilly terrain of their adopted country!

In addition, there were fortified towns like Brasov and Sibiu. Another distinct feature, which can still be seen today, are the many fortified churches. Mostly built by the prosperous Saxon communities in the south.

The final chapter covers the campaigns, battles and sieges of the period. This includes all the main conflicts like the Long Turkish War (1591-1606) and the many internal rebellions. These campaigns show a transition from medieval traditions to the modern innovations of the period. Cavalry became lighter and infantry armed with firearms. Bastioned fortifications meant siege warfare was also important, although they rarely fell to assault.

Most wargame armies treat Transylvanian troops as Hapsburg or Ottoman units. Warfare was generally at a small scale, which makes these forces suitable for games like Pikeman's Lament. I have Ottoman, Polish, Wallachian and even Cossacks who all fought across Translyvania, along with the standard mercenary types. The main local troop types will mainly be found in the Ottoman figure ranges. 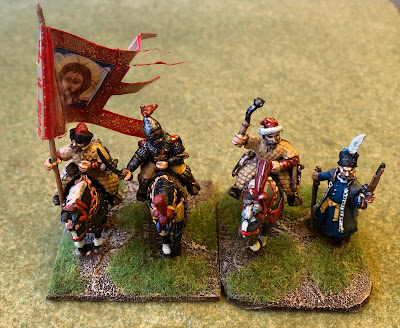