Return of the Ottomans

My fiction bedtime reading has been Return of the Ottomans, the first in the Smoke over the Bosporus series by Maciej Jonasz. The setting for the series is the modern-day Balkans (well, 2017ish), with a Turkish government set on re-establishing the Ottoman Empire. The style is more like John Hackett's Third World War than a Tom Clancy thriller, emphasising military operations. 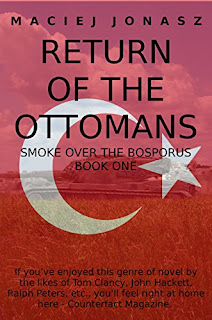 The starting point is the burning of a mosque in Sofia after the alleged rape of a Bulgarian woman by a Muslim refugee. This is used by the Turkish government as a casus belli for the invasion of Bulgaria. After securing the Greek border, a Turkish army corps advances over the Thracian border. It faces delaying actions from Bulgarian mechanised and mountain units who inflict heavy casualties on the Turkish armour before breaking through one of the mountain passes and onto the Bulgarian plain. Meanwhile, the small Bulgarian air force is largely destroyed, and marine units land on the Black Sea coast at Varna. This allows for a secondary drive north of the Balkan Mountains along the Danube to develop a pincer movement on the capital Sofia.

The heavily outnumbered and ill-equipped Bulgarian forces continue to fall back, inflicting some damage but not halting the advance. That is until some other Balkan states decide to intervene at different levels. I won't spoil the story, but this inevitably leads to larger scale battles on both approaches to Sofia.

The author doesn't spend a lot of time on grand strategy. Instead, the focus is on unit-level actions. He takes a platoon or a company of Turkish and Bulgarian troops, gives them a personality, and then takes the reader through the actions they take. This varies from air force pilots engaging in dog fights to mechanised infantry taking on tanks with ATGW. There is enough discussion about the merits of different weapon systems to keep the most ardent tankie happy. There is also a bit on the intelligence war and the use of Turkish sympathisers inside Bulgaria.

Coincidentally, the new Bulgarian defence minister, only this week, has called for a significant upgrade in the Bulgarian military, saying, "We need a capable and combat-ready army that can protect us. We need to restore key military capabilities, but this means that serious spending must be done." These include the development of artillery support capabilities, acquisition of 3D radars, construction of an air defence system, unmanned aerial vehicles, multi-purpose diesel-electric submarines, ammunition for naval vessels, coastal missile systems and the acquisition of field communication equipment. These weaknesses are all highlighted in this, albeit fiction, book.

However, we should remember that this is fiction. The Turkish government does use its Ottoman heritage to expand its soft power reach into the Balkans and elsewhere. Dimitar Bechev's new book, Turkey Under Erdogan, clearly explains this. However, it is a giant leap to turn that into the Islamic fundamentalism described in this book. The Turkish Armed Forces may have moved some way from the secular principles of Kemalism, particularly since the botched coup, but not that far. Junior officers were already more relaxed about religion and the changing role of the Turkish military in politics, as Metin Gurcan's detailed study shows. NATO is also written out of the context for this book, which may be pushing the Cyprus analogy a bit too far.

So, despite my reservations over the context, this is a really well-written book. The action scenes are very credible, and it's a real page-turner. It is also well researched. I have already started the next in the series based on a Greek invasion of North Cyprus. Keep going, Maciej!

Onto the tabletop using 1/300 micro armour and Cold War Commander rules. I took one of the early scenarios from the book. A Turkish mechanised brigade advances over the border and into the pass where the dismounted Bulgarians are waiting. 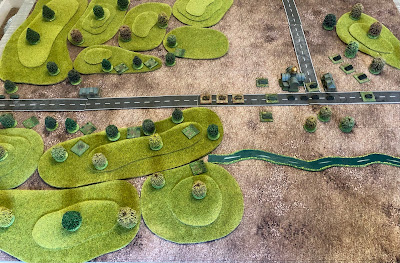 As in the book, they let the recon troop go through and focus on the tanks and APCs. The initial attacks are successful, and they withdraw before the Turkish artillery and air support arrived. Sound tactics until they run out of mountains! 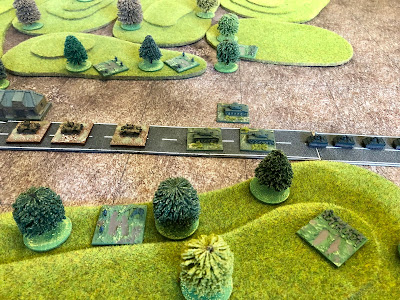