I am on something of a roll with Russian Napoleonics at present. Having finished Alexander Mikaberidze's new biography of Kutuzov, this is the same author's look at Napoleon's crossing of the River Berezina in 1812, a key battle in the retreat from Moscow. 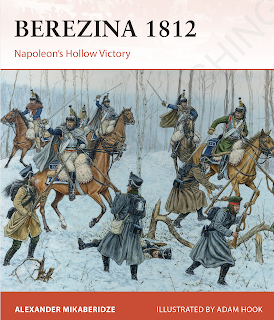 This book is in the standard Osprey Campaign format. So, you get some context, a look at the opposing commanders, their forces and plans, before tackling the three days of the battle, or series of battles, itself. As someone who likes to walk battlefields, I always enjoy the battlefield today chapter. However, this is one battlefield I am unlikely to visit anytime soon due to current events! As always with this series, it is profusely illustrated with excellent maps and colour plates by Adam Hook.

Kutuzov's strategy during the retreat from Moscow was one of harassment rather than seeking a battle. He was happy to attrit the French while shepherding them off Russian territory, ensuring they didn't move south into fertile Russian provinces. Annihilation was possible but not on Kutuzov's agenda. He, of course, appears in the list of Russian commanders along with the leaders of the other columns converging on the river crossing. These include Admiral Chichagov and Peter Wittgenstein, and neither covered themselves with glory in this battle. For the French, we get pen portraits of some less well-known generals, given that half of the marshals Napoleon created fought in the 1812 campaign. These include the 12th Division under Louis Partouneaux and the Polish Josef Zajicek, who took command of V Corps.

The Grande Armée was reduced to about 40,000 men, with few guns and a handful of cavalry by this stage of the retreat. It is often forgotten that the conditions also affected the Russians. Being Russian didn't make you impervious to the snow and ice! Clausewitz, a staff officer in Russian pay, commented that Kutuzov saw his army ‘melting in his grasp’. He carefully nurtured his army, which meant only Wittgenstein’s corps and Chichagov’s Third Western Army would confront Napoleon on the shores of the Berezina. The book provides a full ORBAT for both armies.

The Battle of Borisov pushed the Russians over the river and forced them to destroy the bridge. Napoleon decided to cross eight miles north of Borisov on pontoon bridges. Oudinout made a diversionary attack to persuade the Russians that Borisov was still the favoured crossing point. Russian communications were poor, and they overestimated the size of the French army. The author details the various letters and orders to explain why the Russians failed to contest the crossing seriously. Chichagov became the convenient scapegoat. Napoleon escaped, although thousands of stragglers didn't, but not without heavy casualties. The Grande Armée lost between 25,000 and 40,000 men, the vast majority of them stragglers and non-combatants.

For the wargamer, this campaign offers a range of smaller battles (corps and divisions) that are very playable on the tabletop. There is no shortage of figures for the 1812 campaign, and painting troops in greatcoats is much quicker than the typical summer uniforms. This book provides all you will need.

I dusted down my 15mm Russians for a game at the club last Sunday. My opponent had a British army, historically resulting in a somewhat dubious battle. Although post-Tilsit, both countries were technically at war. The Royal Navy effectively destroyed the Russian Mediterranean Fleet, trying to get home the long way. We used Black Powder for the game, and both my Russian brigades managed to charge across the table quickly, limiting the impact of British firepower. Alexander Suvorov's famous dictum, 'The bullet is a fool, the bayonet is a god', proved correct as my columns ploughed through the thin red line. 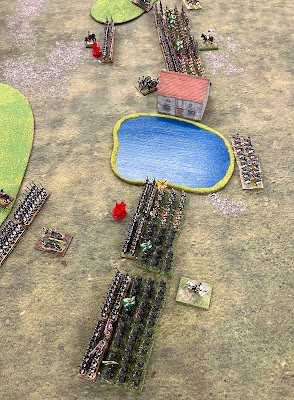 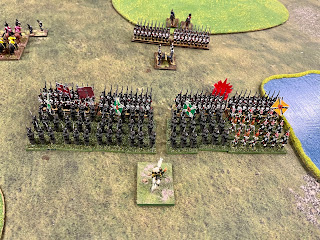 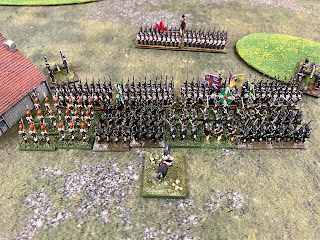