This appears to be the third volume in Ilkka Syvänne's epic military history of late Rome. Eight volumes so far. This volume covers 395-425AD, which may only be 30 years, but it was a turbulent period. It starts with the permanent division of the Empire into eastern and western parts and ends with the demise of John the Usurper. A somewhat unfair name, as there was no shortage of usurpers in late Rome! 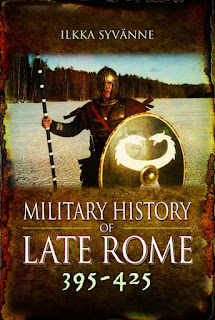 Rome started this period with a military weakened by corruption, undermining its relationship with the civilian population. As the author puts it, 'The officers in general can be considered to have been greedy criminals.' Don't hold back! This didn't stop the Romans from supplying quite large armies. We are generally taught to regard most ancient authors' claims for army size with some scepticism. However, the Romans had a farming surplus, which the author argues could support armies of similar size to the Napoleonic era.

In 397-8, Stilicho launched a major campaign in Scotland. This could have included naval expeditions as far north as the Orkneys. The author argues that the Stracathro-type forts can be dated to this period. He defeated the Saxon, Pict and Irish invaders in a late attempt to defend Roman Britain. We know very little about this period, so getting a new take on these campaigns is interesting. It didn't last long, and he argues that the locals started to organise themselves politically during this period.

Back in Italy, Stilicho faced the Goths, whose main weakness was an inability to besiege towns. Blockades would work if they had time, but it meant the Romans could defend towns with low-grade levies. Stilicho was not just a capable military commander but a skilled diplomat who managed a delicate balancing act when dealing with the various barbarian forces. When he died, the Goths, led by Alaric, brought about the fall of the Western Empire. The decision of Honorius not to pay for their services and to kill barbarian cavalry commanders fatally weakened the field armies. Rome fell in 410, with the Goths gaining entrance by treachery.

The Eastern Empire took a pragmatic line and even managed to largely keep the peace with the Persians. This was the period when the Theodosian Walls were finally completed, making Constantinople almost unassailable. The weak point was the sea walls because the Romans didn't expect a naval attack. I revisited the walls on my visit earlier this year, and I understand the local authority has been doing a cleanup recently. Türkiye has done some excellent work on Ottoman sites, but they are not always as diligent when it comes to the earlier periods. 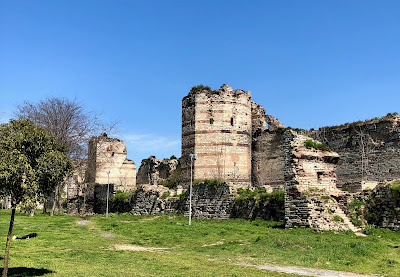 While the west was crumbling, the East Romans had a large army and a strong navy, which delivered military success. Built on the stone walls of Constantinople and the wooden walls of the navy.

This is a heavyweight military history with a relatively relentless series of campaign narratives. The general reader might find this hard work, but if you are interested in the period, there are many new insights. However, there are plenty of colour plates and organisational detail for the wargamer. Late Roman armies are popular on the tabletop, so this is a likely audience for this book. It's a weighty tome, but the ebook options are good value for money.