This is a new book by Caroline Boggis-Rolfe covering the history of the lands around the Adriatic. Very timely for my Napoleonic Adriatic project. 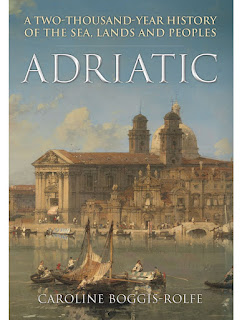 I know from experience that there are a few challenges in writing a history of a geographical entity. First, no place exists in isolation, so you must decide how far to stretch the geography to make sense of events. Then you have the choice of which events to focus on, given the timespan is from antiquity to modern times. My interest in the Adriatic is on the Balkan coast, modern-day Croatia, Montenegro and Albania. However, this author is more focused on Italy. In fact, it is a pretty good history of Italy in its own right. The other coast is addressed; it just doesn't get the same attention or the broader Balkan context.

Venice plays a big part in the story of the Adriatic. The author helpfully recognises the earlier period when the Dalmatian expansion was driven more by destroying pirates than by building sea routes. Their falling out with Skanderbeg in the 1450s doesn't usually get much attention either. Skanderbeg defeated the Venetians in 1447 after they supported the Ottomans against him.

Napoleon's expanding Empire in the Adriatic gets a chapter in the book, with an examination of Marmont as the first governor-general of the region. Ali Pasha also gets a chapter, although there was too much emphasis on viewing him through Lord Byron's eyes for my taste. Instead, there are better observers of the old rogue. She also briefly covers the looting of the Elgin Marbles from the Parthenon, still a topical issue to this day.

The 19th century was dominated by Italian unification, which was an important event for Italy, but the Adriatic coast was not the focus of those campaigns. Venice had already lost its independence, and the Austrians hung on to these territories for a time. Archduke Maximilian rightly gets some attention due to his command of the growing Austro-Hungarian fleet. A story covered in the Netflix series 'The Empress', which is worth a watch.

The book wraps up with the story of D'Annunzio, and his short-lived republic on the Dalmatian coast. Italy's enclaves on this coast are a less well-known feature of the WW2 story. Sadly, the author falls into the trap of recent revisionism regarding Tito. Churchill was not 'guided by false intelligence' when it came to Tito. On the contrary, he backed him with excellent intelligence, including ULTRA intercepts, and rightly supported the only resistance prepared to take on the Axis forces.

Overall, this book is a decent overview of the region. I would have taken a different focus, but that is just a matter of choice. There are no new insights, but if you want an introduction to what is a fascinating part of the world, this will do the job.