Sieges can be challenging to game on the tabletop. The sheer size of most sieges, the time scale and the forces involved conspire against a tabletop simulation. They can also be a bit boring. The solution is often to fight sections of a siege. The Siege of Belgrade springs to mind in the old WAB supplement, but even this was really a battle fought around siege works.

The authors of a new board game have come up with a really interesting game based on one of the classic sieges of the 17th century - Kara Mustafa's attempt on Vienna in 1683. It has just arrived in the UK - arriving in time for my wife's Christmas present to me. 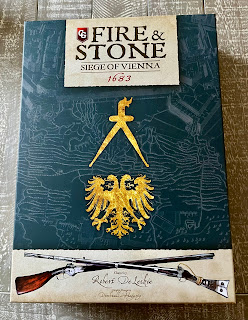 For your money, you get a concise booklet giving the history of the siege, a good quality board, game cards and all the player tokens in wood and card. Everything is high quality, with no flimsy parts. You can replace the board with a gaming mat, but I can't see the need.

My usual complaint about board games is unnecessary complexity. So, I was relieved to see a slim rulebook and a one-page QRS. Set-up time is also quick because you don't need to deploy anything for the troops. This is the board on the first move, with the Habsburg bastions supported by cannon in yellow and the Ottoman camp in red. The morale and move ladders are on the right, and the strategy and troop cards are on the left. There is a section for mining operations, which I didn't use in the first game. 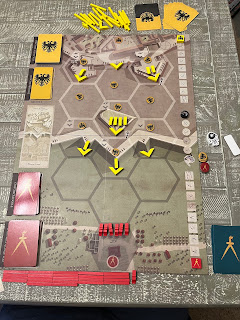 The Ottomans go first, and having drawn five strategy cards, they can use them to take actions like entrench, assault, bombard, or mine. Each card also has a particular strategy that you can use instead of an action. Each side also gets five tactic cards you can deploy to support a specific plan. I played the Ottomans and went straight into an attack on the outer defences. Each side deployed three troop cards (The Ottomans usually get more), and both sides deployed the tactic cards on the right. Battles are resolved in a few phases that depend on bombarding and fortifications. The yellow wooden strips are temporary fortifications. 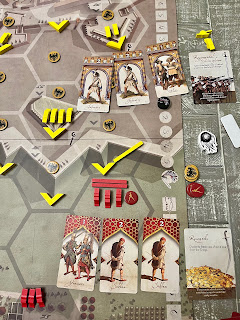 A successful assault enabled me to bring more cannons into the supporting hex. They then attacked the centre. Here you can see the additional Ottoman cards, which come about for as long as you can trace a supply line to the camp. 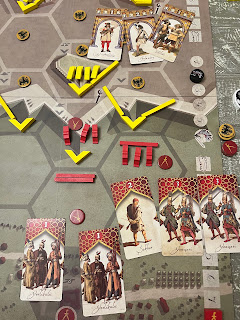 Having seen off a couple of Habsburg sorties, I methodically advanced to capture the Ravelin. This had the added advantage of destroying much of the Habsburg artillery. 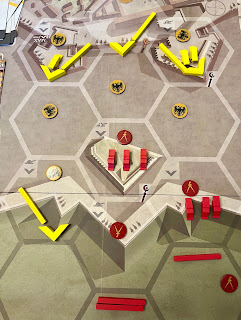 In the final moves, I advanced into the open ground, which was easier because the Habsburgs had no fortifications there. Events and successful assaults can move the morale ladder up and down. These two moves brought the Habsburg morale to an end. This ends the game without me having to assault the curtain wall. Control of which is another Ottoman victory condition. 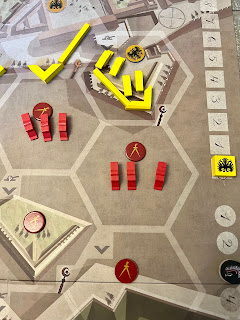 I'm sure I got a few things wrong, but my initial reaction is that this is an elegant game system that gives a decent game in a couple of hours once you have mastered the rules. The basic mechanisms are straightforward while allowing a subtle array of tactical approaches. Not that there was anything subtle in my plan! It is a game that really needs two players, although standard solo-play techniques still give a decent game. My thanks to the Istanbul Wargamers for highlighting this game to me.