This is the latest Osprey Campaign book covering the destruction of the Russian Second Army at Tannenberg in 1914 by Michael McNally. The naming of the battle as Tannenberg was a political decision, resonating with the defeat of the Teutonic Knights in 1410. But, that was simply a small village on a vast battlefield. 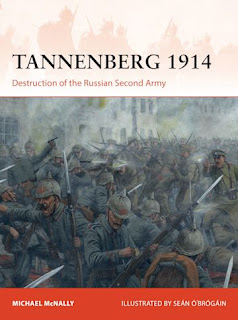 As is usual with this series, you get some background to the campaign, followed by an outline of the opposing commanders. The Russian generals, Rennenkampf and Samsonov, had fallen out during the disastrous Russo-Japanese War, which did not bode well for cooperation in this campaign. The Germans later included von Hindenburg, the classic Prussian Junker, and his right-hand man Ludendorff.

The Russian Second Army under Samsonov included five corps and two cavalry divisions. The First Army under Rennenkampf had four corps and four cavalry divisions. Each corps had two infantry divisions of two brigades, with two four-battalion regiments. The First Army would consist of some 176,000 infantry, 23,000 cavalry, 408 machine guns and 696 pieces of artillery. Samsonov’s Second Army consisted of 178,000 infantry, 18,000 cavalry, 384 machine guns and 636 artillery guns. All in all, the Russians would field a force of just under 400,000 men. A German corps was similar to its Russian counterpart. After transfers to the west, they had four corps in East Prussia. The book includes a detailed ORBAT.

The Russians operated from occupied Poland and Lithuania, which required troops to defend lines of communication. In contrast, the Germans were fighting on home soil. However, the German plan relied on knocking out the French, allowing troops to be redeployed to the east. The failure of the Schlieffen Plan in the west meant they would have to fight a two-front war.

The book gives a detailed account of the Russian invasion and how the Germans countered it. Understanding is helped through excellent maps in the Osprey style. The big picture is of Russian failure, but they fought well in several battles that constituted the overall campaign. It was the projected abandonment of East Prussia that led to Hindenburg and Ludendorff's appointment to command the German forces. For both sides, the initial clashes of the campaign in East Prussia would prove to be a sharp lesson in the realities of modern warfare.

After the campaign, the Germans recognised the need to reinforce the eastern front with two corps. This may have contributed to the German defeat on the Marne, but they helped the Germans defeat Rennenkamf at the Battle of the Masurian Lakes on 7-14 September.

This book has all the details the wargamer needs to refight the battles on the tabletop. While there are some decent colour plates, you need the relevant Men-at-Arms titles to paint the units. Given the scale of the actions, Bloody Big Battles is a good rules option.