Early medieval battle at the club today using Field of Glory rules. Haven't really mastered these yet, probably because I don't use them enough given all my other interests, but they almost always produce a good game.

My opponent was Robert Low, author of the Oathsworn series of books. Bob has a superb Rus army in 28mm and like me is finding his way with FoG. I fielded a Ghaznavid army and he clearly wasn't expecting the elephants. Despite some pretty desperate combat dice they manged to stomp their way through his right flank whilst my cavalry peppered him with arrows in the centre. Elephants are more predictable in FoG compared with WAB but still great fun. 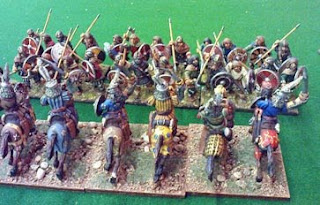 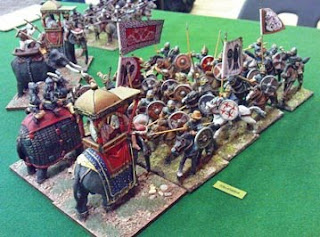