Once a year my wargame club GDWS holds a double header - two days of gaming over a weekend. This enables us to play big multi-player games.

This year I organised a game - 1713 Moldavian Alliance. The scenario involves Peter the Great trying again to occupy Moldavia with a new invasion after his abortive 1711 campaign. This time he obtains support from the Austrian’s. The War of the Spanish Succession was grinding to halt and the Austrian’s had crushed the Rakoczy (Hungarian) Rebellion by 1711. The Austrian’s were concerned about Swedish troops on their northern border and the Ottoman’s in the Balkans. Historically they did actually go to war against the Ottoman’s in 1716.


We envisage a Russian army led by Peter the Great crossing the Pruth River and besieging the Moldavian capital Jassy. An Austrian army is coming through Transylvania to support him. In opposition the Ottomans have mobilised a large field army and have been joined by their allies the Crimean Tartars as well as more reluctant support from their vassals in Wallachia and Moldavia.

We used 28mm figures from my collection, over 600 in total, using 18C Principles of War rules. The scenario provided a good game. The Russians only just stopped the Ottomans from cutting off their line to the Austrian's and then their other flank nearly collapsed. Their centre held well supported by cavalry until the Austrian's arrived and the day was saved. The Ottoman's had plenty of troops but not enough room to deploy them or the necessary punch. 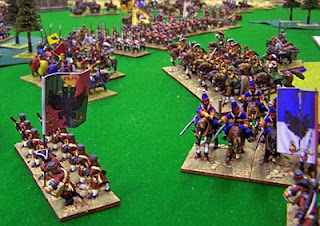 Thanks to Bob, Bill, Derek and three Dave's for a good weekend gaming. Yes it is obviously true that most wargamers are called Dave!
Posted by Balkandave at 22:01