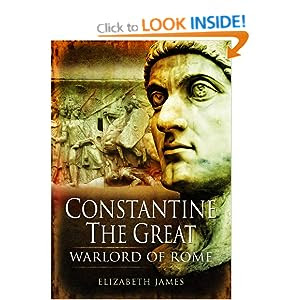 A short interregnum in my reading around my key projects has been Elizabeth James book, 'Constantine the Great - Warlord of Rome'.

Constantine is of course best known as the Roman emperor who converted to Christianity and effectively led the Empire very quickly in the same direction. However, as the title implies, the author seeks to remind us that this was only possible because he was also an outstanding general.

James sets out the organisation and equipment of the Roman army in the 4th Century and how it sought to defend the extensive borders of the Empire. Constantine was in Britain when his troops declared him Emperor and there is a statue of him in York. She then takes us through the campaigns of the ensuing civil war including the 'vision' at Milvian Bridge that led to his conversion. Then the later campaigns in the Balkans that led to the capture of Byzantium. This was converted into the new capital that bore his name, Constantinople.

This is a good narrative history and while the religious impact is explained, this book focuses on his military campaigns and the armies he led.
Posted by Balkandave at 22:30