One of the very few Balkan conflicts I haven't done before is Trajan's invasion of Dacia.

I have been collecting Roman units for the past six months or so. Not quite a full Hail Caesar army yet but getting close. I have a reasonable collection of generic Celtic infantry that will muster at the least the back ranks of the Dacian foot units. There were several Celtic tribes in the area so they can also be fielded in their own right.

To supplement this I have used the Warlord Dacian plastics. Tremendous animation in these figures, probably too much to fit together well, but these will provide the front rank for my units. Not really enough falxmen so I will need to supplement these with metals.

Some command stands of course. Although with Hail Caesar rules you can't rely on your units to take any notice of them! 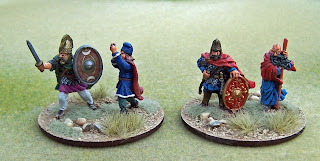 What I really like about the Dacians is the balance the Sarmatians give the army. Shock cavalry and horse archers. These Warlord metals are very nice indeed. My horse archer collection will probably suffice, but can I resist a unit of female warriors? Probably not.

If these fine figures are not enough for the project, Warlord have produced a supplement, 'Rome's Dacian Wars', written by Craig Woodfield. This is very good. Plenty of eye candy to go with the potted history, scenarios and army lists. In addition some rule additions including sieges and a skirmish game. I am also painting up some Foundry casualty figues for those very nice Warbase casualty counters.