I am on holiday in the Balkans, where else you might say! To be specific, Kotor in Montenegro.

The old town of Kotor (Cattaro) as shown in the picture below is recognisably the Venetian fortress it was for several centuries until the fall of the republic in the Napoleonic wars. The walls are very well preserved, although the Castle above the town is in some disrepair. There is a small but interesting maritime museum in the lovely old town with its narrow streets, churches and palaces.

On the subject of Napoleon, his forces did briefly occupy this coast. Napoleon was keen to expand his Illyrian province and sent Marmont to negotiate with the Montenegrin ruler, Vladika Petar in August 1807. The previous year they had fought further up the coast at Herceg Novi and although the French won, Marmont remonstrated with Petar over the Montenegrin practice of cutting the heads off their enemies. Petar responded that the French had no problem chopping the heads off their King and Queen! Fair point, I would say.

There is some British interest. In 1814 Captain William Hoste besieged Kotor with Montenegrin help. Finally capturing the town by dragging cannon up the mountainside. He left the keys with the locals and sailed away without waiting for the Austrians, who by treaty were taking over. It was eventually turned into a major Austrian naval base.

Anyway, interesting history and an absolutely lovely spot for a holiday. 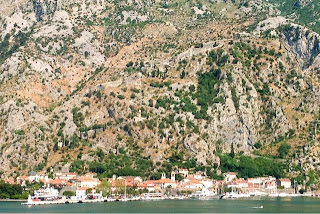