I played my first game of Chain of Command at the club yesterday, the WW2 platoon level skirmish game by Two Fat Lardies.

We played a VBCW scenario, with three sections of my Red Clydesiders supported by a T26 and an armoured car, against a similar force of Covenanters. 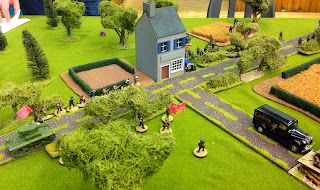 The spotting phase is innovative, with markers patrolling in 12” moves until they contact an enemy patrol within 12”. That locks them in place and converts into jumping off points for a rifle section. You have four markers that have to keep within 12”, so that constrains your ability to start too far into the table. In most cases it will probably result in a standard deployment, but it doesn’t take long and makes you think about the terrain and how best to exploit it with deployment.

The game places a great emphasis on leadership. The command dice roll at the start of each phase makes all activations and these allow leaders to move, fire or rally troops. Senior leaders are the most important as they have multiple activations for troops within 4”. You also collect command points that can be used to interrupt during your opponent’s phase.

Shooting effectiveness is based on the training of the enemy troops like FoW. The ranges are long as this is a skirmish game.

We had a fun game, but I have a few reservations. Like a lot of TFL games the movement is very random. Troops can sit around doing nothing for a long time and I am just not convinced about this. Units faltering by events like being fired on I can understand, but just sitting around when you have clear orders from the outset, simply doesn’t feel right. It is also possible for one side to have two consecutive phases, which is a very big hit.

A number of the mechanisms are unduly complex, even allowing for our first game learning. There are unnecessary stages and detail that I am not convinced adds anything to the play or the ‘realism’. When you get to armour effects there are many outcomes that you need to write down to remember. I found this irritating, slows the game down and visually unattractive.

In summary, some nice ideas and I don’t have a problem with the leadership focus. However, it’s too random, unnecessarily complex in places with some turgid mechanisms.  I’m afraid it wont tease me away from Bolt Action.
Posted by Balkandave at 12:28