I did promise myself some gaming over the holidays and I got to a project inspired by my first game with the excellent Musket and Tomahawk (M&T) rules.

At the time it occured to me that this would work just as well on the military border between Croatia and Bosnia/Serbia, known in Austrian as the Militargrenze.

I have written a short article on Balkan Military History explaining the military structures on both sides of the border. Then I converted the main troop types into M&T classifications.

I have now fought three short games around a Grenzer village being attacked by Ottoman forces. The rules work really well and provide interesting and quick games.

Here we have a unit of Azebs and another of Gonullu trying to work their way around the back of the village. However, they are repulsed by the sturdy Genzer. 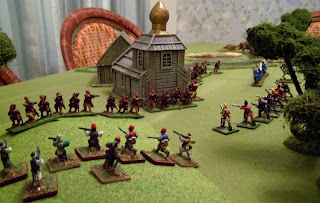 The Janissaries did little better in the frontal attack. 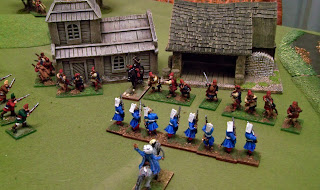 Just as the Grenzer though it was all over with the Ottomans in flight. The mighty Rasputin (our cat) arrived on the scene! 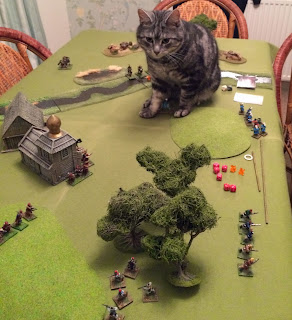 But of course, with name like Rasputin he has to be an Orthodox Christian, so he decided to play with the fleeing Azebs! 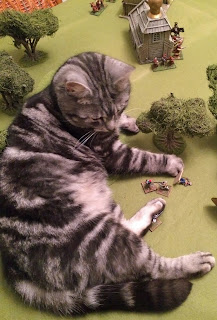 Whatever the M&T classification - he wins!﻿
Posted by Balkandave at 21:41