Over the years I have written about and played a number of wargames based on the Struma Valley campaign in Macedonia during WW1. Between 1916 and 1918 two British divisions and some Greek forces fought mostly Bulgarian and Turkish units on this front. 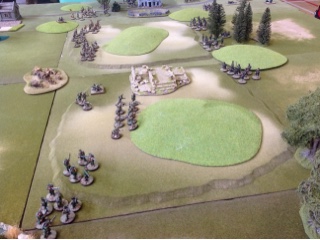 It's attraction for WW1 gamers is that you can fight very open battles, far away from the trench warfare of the western front, or even a few miles up the road at Doiran. The Struma Valley was infested with malarial mosquitos that caused more casualties than the fighting. So the armies based themselves on the hills either side of the river and the war was one of patrols and skirmishing, with the occasional brigade size action. As I discovered, the mosquitos haven't gone away!
Yesterday, I visited the battlefield. I imagined the valley to be narrower than it actually is. The terrain is wide and flat, although even today very boggy. I visited the villages that were the target for one such action described Wakefield and Moody (Under the Devil’s Eye), then called Yenikoi, Karajakoi Zir and Bala. Between 30 September and 4 Oct 1916, 81 Brigade (27th Division) captured the villages after fierce fighting and fought off Bulgarian counterattacks.
The villages today are larger with mostly modern dwellings, so it is difficult to picture the action. Although this photo gives a flavour of the terrain. The hills in the background were the British positions. 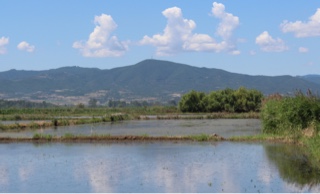 You can also visit the Lachanas and Struma cemeteries where the British dead are buried. A bit off the beaten track, but beautifully maintained by CWGC. The Struma cemetary in particular is an oasis of tranquility. 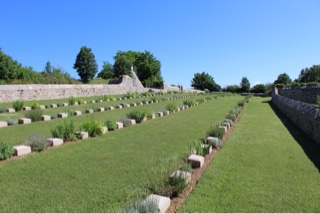 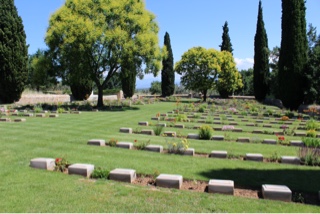 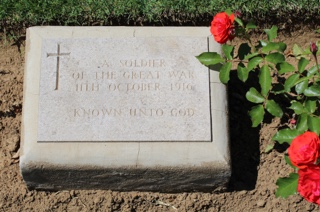 Sadly, not all the dead could be identified, but they are not forgotten.
Posted by Balkandave at 11:09