This is the second book in the 'Blood of Kings' series by K.M.Ashman. I reviewed the first one, 'A Land Divided', in June. The setting is post-Norman conquest Wales. 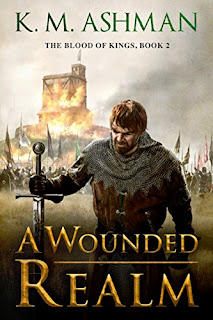 The second book takes up the story some 12 years later. The 'Hero' of the first book, Gruffydd ap Cyan still languishes in the prison of Hugh the Fat, a Norman marcher lord. An opportunistic escape, allowed him to flee to Ireland where he recovered, and in an alliance with the Vikings, captures Ynys Mon (Anglesey).

This book takes in more of the English power struggles of the time. The link is a Welsh princess who becomes the mistress of William II's brother Henry, who takes the throne on William's death in a hunting accident, or maybe not so accidental - the author unsurprisingly plumps for the latter.

We have a good siege at Pembroke, one of the castles the Normans built to consolidate their lands. And finally, the dramatic rescue of another Welsh prince, Hywel ap Rhys from the Norman castle at Hen Domen.

The storyline in this book is bittier than the epic struggles of the first, but the author captures well the complex power struggles between squabbling Welsh kingdoms, the marcher lords and the English crown. It has all you could want in historical fiction, while keeping pretty close to the historical record, such as it is.

Really enjoyed this again and looking forward the the third book when it is published.

Here is a photo of a Lion Rampant clash I played out when I finished the book with Welsh spearmen facing up to the dreaded charge of Norman knights. 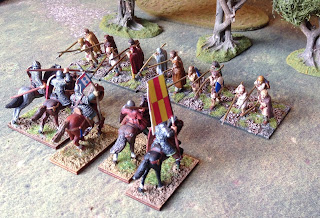