I do enjoy an alternative history, and my latest reading has been Year of the Prince by George Kearton.

As he says in the introduction, for over 50 years at the beginning of the eighteenth century, thousands of Britons would not drink to the health of their regnant Royal Family. Instead, after passing an open hand surreptitiously over their glass, they would drink a toast to “The King over the Water”; a reference to the heirs of the exiled House of Stuart. The final Stuart attempt to regain the throne failed in 1745. But what if history had turned out differently?

I won't ruin the book for you, but it's a good short read and not too fanciful. Like many events in history, it only takes a small a bit of luck, bad weather etc to create a very different outcome.

As I am exploring Sharp Practice 2 at present, this was an opportunity to dust down the forces I did last year for the 300th anniversary of the battle of Sherrifmuir 1715. This was an earlier Jacobite rebellion and involved the legendary Rob Roy, an ideal character for Sharp Practice. I also fancied trying the rules out in a town setting.

We start with some preliminary baiting. A bare arsed highlander taunting the lowland Scots militia. Should they hold their first fire for a bigger target? Rob Roy is getting a little frustrated here with these Jacobite gentlemen, who are not rushing to support his clansmen's charge. Too many tiffin breaks! 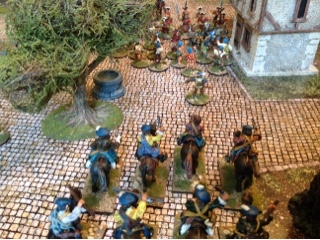 Here we have the highland charge from both angles. The tomahawk rule works well. 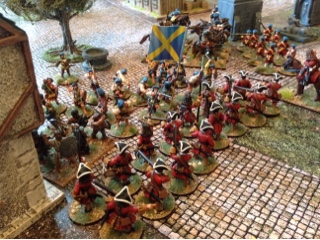 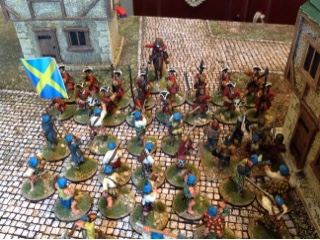 And finally, a celebratory drink for Rob and his men. Job done! 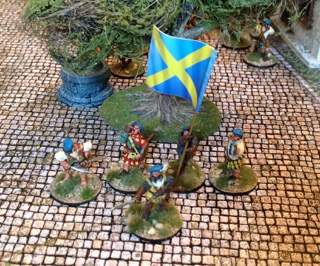