My latest reading has been Andrew Field’s book ‘Waterloo: The French Perspective’.

It’s an old adage that history is written by the winners and that is certainly true for Waterloo. It is even alleged that Wellington supported a smear campaign against Siborne because his research questioned parts of the Duke’s version of events. The author of that allegation, Peter Hofschroer, also wrote a book on the Waterloo campaign, the second volume of which is called ‘The German Victory’. The Duke really would have turned in his grave at that! 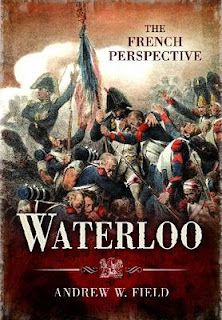 Waterloo was of course a massive battle in terms of the men involved, even if the battlefield wasn’t that large. However, even walking it 200 years later, I was struck by how difficult it was see all parts of the battlefield - there was no Lion monument in 1815! Added to which you have the general’s curse on any black powder battlefield, smoke.

For this reason, even the memoirs of those present, can only cover a relatively small part of the battlefield. And that’s before any historical revisionism comes in.

Andrew Field has done a wonderful job pulling together French perspectives of the battle. It gives a very different picture of the battle and questions what those of us brought up on the classic British histories have come to believe about the battle. He doesn’t claim to have discovered radically different ‘truths’, but he does offer some very different explanations.

For example, I always understood that the action at Hougoumont, drew in greater numbers of French troops from Reille’s Corps, almost to Blenheim proportions. In this book it is argued that many more Allied troops were engaged in the vicinity of the farm, bringing each side up to similar numbers. There also appears to have been two, if not three, break ins.

Field also discusses the type of column d’Erlon used in his attack, suggesting that the wide formation was influenced by his experience of fighting the British in Spain. They certainly did not come on ‘in the same old way’. This still leaves open the wisdom of experimenting in such a crucial battle, but he does explain the problems in coordinating the classic cavalry, artillery and infantry combined arms assault. Similarly, the great cavalry charges were not entirely without precedent and may have been forced on Napoleon by the arrival of the Prussians.

Field goes on to examine the other key elements of the battle - La Haye Sainte, the sunken road, Planchenoit and the commitment and formation of the Guard. Liberally quoting from French and Allied sources.

This is a fascinating book and an absolute must for the Waterloo collection.
Posted by Balkandave at 20:34