The Men Who Would Be Kings

First try yesterday of the latest Osprey Wargames rules, 'The Men Who Would Be Kings'. These are written by Daniel Mersey, the author of Lion Rampant and have a number of design similarities.

These are quick play skirmish rules for the colonial period - roughly Sikh Wars to the Boer Wars. Skirmish in this context means 40-50 figures a side, more for the native armies, although there is 'skirmish kings' options to play with half sized units. There is also a very useful solo gaming chapter called 'Playing against Mr Babbage'.

A Field Force consists of a around five units, each of which has a leader, the competency of which is diced for in each game. A European force might consist of regular infantry and irregular auxiliaries. Infantry units have 12 figures, cavalry 8 - while tribal units are 16 for foot and 10 for horse. There are rules for artillery, but they are assumed to be light mountain guns or machine guns.

Each unit is diced for in the activation phase, needing to equal or exceed the leader's command factor. If passed, the unit can take one action - move, double, skirmish, shoot, attack etc. Some are free actions, like regulars can always fire without dicing - tribal units can always attack. Shooting and combat are straightforward rolls for each figure, having to equal or exceed the units firing factor. Cover and other factors are accounted for in the number of hits needed to kill e.g. long range and soft cover needs two hits. If a unit suffers casualties it takes a pinning test. Pinned units have to rally next move rather than take an active action.

For my trial game, I decided on a more obscure colonial conflict. The Ottomans occupied the Middle East from the 16th Century until the 20th Century. Egypt strayed in and out of the Empire, but the core lands in Palestine, Syria, Lebanon and modern Iraq had Ottoman garrisons throughout. The Arabian Peninsular was also garrisoned, although control of the interior was patchy at best. There were major wars with the Saudis and lower scale conflicts with the Kurds and Bedouins. Policing actions were commonplace, very much at the scale these rules are aimed at.

The army lists are set out below for the Ottomans and an Arab field force of the standard 24 point size.

The game was a simple encounter game around a a small village. The Ottoman regulars held off the Arabs on the left, but the Arab right wing swept around the village rolling up the Ottoman line. 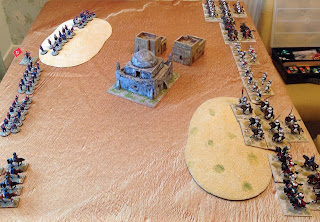 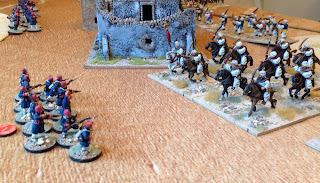 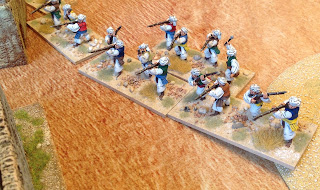 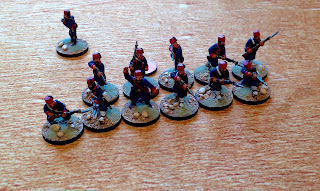 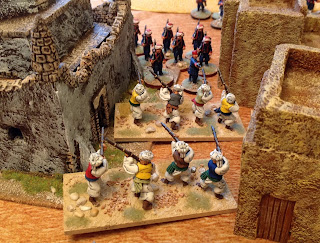 The rules played very well and like Lion Rampant they are simple mechanisms, yet subtle in their application. This was perhaps an unusual game given the number of tribal cavalry on the table. Cavalry are possibly a bit strong, with infantry needing two hits per figure. I am not sure what the justification is for this and it certainly made the Bedouin and Arab cavalry very difficult to beat. Other than that, the rules provided a quick game, with plenty of colonial flavour. It's certainly faster play than Sharp Practice 2. I will be playing more of this.