After reading Dimitar Bechev's book 'Rival Powers', I realised that my knowledge of the modern Russian army was stuck in Soviet days. So, off to Osprey to remedy this and two titles cover the land forces at least. 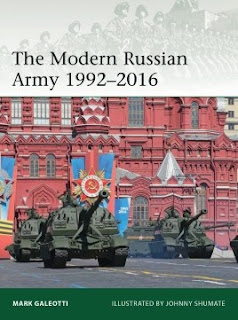 The first is 'The Modern Russian Army 1992-2016' by Mark Galeotti (Elite 217). The author takes us through the key conflicts from the disastrous First Chechen War in 1994-96 through to the Georgian War of 2008. All of these conflicts highlighted the inadequacy of the army and the need for reform. However, reform was resisted by the higher command elements until the Georgian War gave Putin the opportunity to implement fairly radical change.

The reformed army includes a move to smaller more balanced units, with a shift from divisions to brigades. It remains a large force of 85 brigades, with 4 tank brigades and 35 motor rifle brigades, plus support brigades. Around 40 of these are frontline units. Larger units have reappeared since 2015, but they remain smaller than their Soviet equivalents. The author sets out a fairly detailed order of battle for 2016.

The other major reform is the Russian soldier. The draft remains, but the army relies much more heavily on professional soldiers, the Kontraktniki, who serve for three year terms. This compares to 12 months for conscripts who are really only effective for a few months. By 2016, more than half the military were professionals. Interestingly, this includes around 5% who are foreign born soldiers, who serve for 5 years.

Pay and conditions have also improved as have training and officer education. However, there remains a weakness in creating a corps of NCOs who are educated to the required standard.

Chapters cover specialist forces, including the VDV air assault units, naval infantry and Spetsnaz. Not all of these units can be regarded as elite, but they remain the cutting edge the armed forces.

Finally, the author covers weapons and equipment, much of which remains of Soviet era and style. Dated, but rugged that the basic trained conscript can use. Modern weapons are being introduced, including new small arms to replace the AK47 and new protective equipment. This is known as the Ratnik (warrior) suite of uniform and personal equipment.

The frontline tanks remain the T72, T80 and T90 designs, although the T-14 Armata is supposed to be gradually introduced, even though the design is controversial. These will be supported by the T-15 IFV, which will replace many of the BTR and BMP range of carriers. The Koalitsiya SP 152mm gun will provide fire support. The ageing MLRS and SAM systems are also being updated.

The second title is 'Russian Security and Paramilitary Forces since 1991', by the same author. 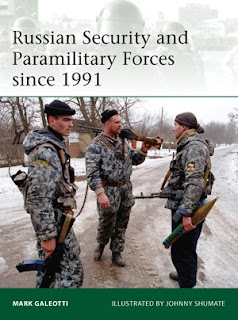 While these units are primarily for internal use, they have taken part in recent conflicts. They include the MVD, interior troops (VV), the Federal Security Service (FSB) and an array of smaller branches. These forces have a variety of capabilities, from basic police roles to specialist anti-terrorist units. The numbers are huge and many units look and are equipped like the army, shorn of heavy support weapons.

Both books are lavishly illustrated with photos and excellent colour plates by Johnny Shumate. An excellent introduction to the modern Russian army.