I used to play Saga regularly, but the advent of Lion Rampant caused something of a drift away from the rule system. Saga 2 has sparked renewed interest and I have been trying it out this weekend. 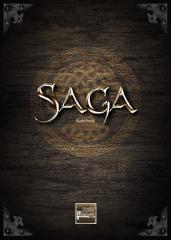 If you want to fully understand the changes, I would recommend Dom Sore's article in the March 2018 edition of Wargames Illustrated.

The main rules are in a softback booklet, which includes the main rules and an introductory scenario. Warbands are organised in pretty much the same way with the simple one point for 4 Hearthguards, 8 Warriors or 12 Levies. There are also heroes and other extra characters in the supplements, or universes as they are called.

Movement is in straight lines, which seems a bit strange at first, but doesn't make a lot of difference on the table. If you have the measuring sticks they still work. Shooting and combat is done following activation and can be in any order, although tactically you are still likely to want to shoot first then charge. I still think shooting is too effective, but I may just be smarting from being shot up by Saracens! Attackers roll to beat the target's armour and then the defender rolls for saves. Fatigue is now limited to 3 for every unit, which makes Levies useful as they now also get an order dice.

The big changes are in the special abilities created by the Saga dice and battle boards. These have all changed quite a bit and will take some learning for each army you use. Warlords are also treated as a unit on their own and can pass off hits to nearby Hearthguards.

To play the game you will need one of the supplements or universes. There are two so far. One for the Age of Vikings and the other for the Crusades. Both have twelve armies and the associated battle boards. These are not cheap at £30, but the production quality is superb and you get the boards. There are six different sets of Saga dice for each universe at another £12 each, but you can use ordinary D6 to mimic them. Each army has a description, army list and legendary units, together with a very useful commentary.

I played three games this weekend. A quick four point game between Anglo-Saxons and Scots. This is my preferred period for Saga and I look forward to trying some more warbands, particularly those in Eastern Europe. 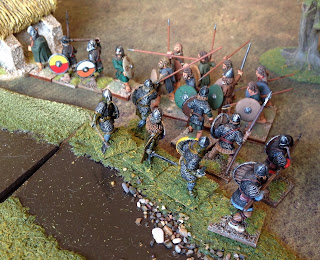 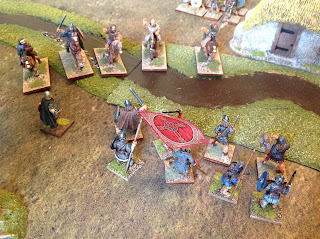 At the club today we moved up to the Age of Crusades. I dusted down my Teutonic Knights who did reasonably well against the Milities Christi, had it not been for some pretty dire defending dice. For the second game they faced Saracens. I won the initiative and got across the table quickly to pin some units, but still got shot to bits. 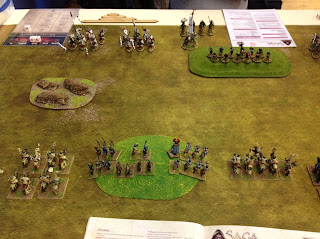 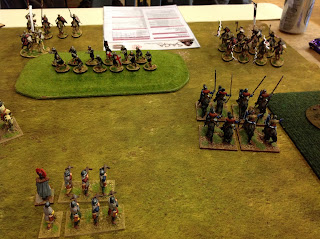 The general consensus amongst my playing pals is that Saga 2 is an improvement. The rules are generally a bit tighter and better explained. It still gives a fun couple of games in a club session. After getting used to Osprey rules, the big downside is cost. After buying all the books and a couple of new dice sets, there wasn't much change out of £100. And that's before I am tempted into some new figures. I am not saying it isn't value for what you get, but I suspect it will put off many from trying it out.