Armoured Forces of the Bulgarian Army 1936-45

I suspect this book hasn't exactly flown off the Helion bookshelves, although at 1.6kg, it's unlikely to take off fast!

However, it should. 'The Armoured Forces of the Bulgarian Army 1936-45' by Kaloyan Matev, is a beautiful book. A hugely detailed piece of research in the Bulgarian archives, well written, profusely illustrated and colour plates as well. 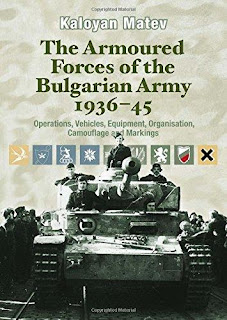 The author starts with some background on the earliest motorisation of the Bulgarian army in the Balkan Wars and in WW1. In the 1930's, treaty restrictions and the economy limited armoured development. The first AFVs were 14 Italian L3/33 tankettes in 1935, although over 300 trucks, scout cars and artillery tractors were also purchased from different countries. In 1938 they took delivery of 8 Vickers 6-ton tanks.

With the outbreak of war, Germany became the main supplier, initially with captured or new weapons including 25 Skoda LT vz.35 tanks. These were well received and a further 10 were quickly ordered.

In 1941 Bulgaria joined the Axis and acquired 45 Renault R.35 tanks. These captured French tanks suffered from a range of faults  and poor cross country performance. Most Bulgarian units were facing Turkey, who looked as if they might join the Allies. 24 Turkish divisions were concentrated in European Turkey.

Bulgaria did not participate in the invasion of Greece, but did perform occupation roles in Macedonia, Greece and Serbia. Pressure was placed on the Germans to provide modern tanks in 1943, when in looked like the Allies might invade Europe through the Balkans, again with Turkish support.

They wanted STUG III assault guns, Pkw IV tanks, half tracks and armoured cars. These started to arrive in the summer of 1943 and by Feb 1944, 87 Pkw. IVs and 55 STUG III's were in service.

As the Soviets entered Bulgaria, there was no resistance, and after a coup, Bulgarian army units were reconstituted as Soviet allies. An armoured brigade fought with the Soviets during the invasion of Yugoslavia, clashing with the retreating Germans, suffering significant casualties and tank losses. These interesting actions are described in some detail, together with colour maps.

In 1945, the Bulgarian army received replacement captured German tanks from the Soviets, including Panther tanks. They fought in northern Yugoslavia and Hungary, ending up in Austria at the end of the war. 105 captured axis AFVs were transferred to Bulgarian service by the end of the war.

While this is probably not a book for the general reader, it covers the subject very well. For the wargamer, it provides some interesting gaming possibilities and has everything you need to reproduce these units on the tabletop.
Posted by Balkandave at 22:40