I have not had a lot of time for painting in recent weeks and the primed House Clegane Mountain Men have been staring at me across the painting bench. You don't argue with The Mountain!

This unit comes with the base 'Song of Ice and Fire' game and consists of ten mountain men (hint, they are big!) in three poses, plus a standard bearer and an Assault Captain. Nicely sculpted figures, with no assembly required. 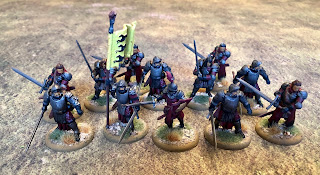 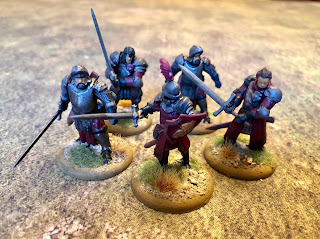 House Clegane support the Lannisters of Casterly Rock and their lands are southeast of the rock itself.

I have also dabbled for the first time in 3D printed models. My 20mm modern British forces lacked some essential vehicles. Butler's Models do a Scorpion and a Viking all-terrain vehicle. The Scorpion is a very nice model. The Viking came with a lot of flash, but it is easily clipped off. Both painted up pretty well and required no assembly - always a big plus with me. 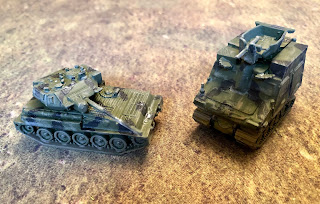 Email ThisBlogThis!Share to TwitterShare to FacebookShare to Pinterest
Labels: Game of Thrones, Modern