Greece 1941 - The Death Throes of Blitzkrieg

The German invasion of Greece in 1941 and the British intervention is often dismissed as a sideshow, or merely a prelude to Operation Barbarossa. The focus is usually on Churchill's decision to weaken the British and Commonwealth forces in the Western Desert by sending a small army to support Greece.

This new book, ‘Greece 1941: The Death Throes of Blitzkrieg’, by Jeffrey Plowman, covers the strategic decisions and the campaign itself. However, it also argues that the campaign demonstrated the limitations of Blitzkrieg, in the mountains and limited infrastructure of Greece in 1941. 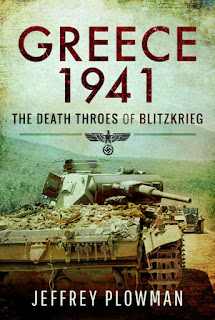 The author sets the scene with a description of the Balkans in 1941. It was an important strategic region for Hitler, who needed the raw materials, particularly Romanian oil, and a safe flank as he embarked on the invasion of the Soviet Union. The disastrous Italian invasion of Greece had stirred up the Balkans, which the Germans could have done without. However, in the vague demarcation between the Axis powers, the Mediterranean was in Italy’s sphere of interest.

The British and Commonwealth support for Greece was called Operation Lustre. The impact of diverting much-needed units from Libya is dealt with as well as the political sensibilities of sending Anzac divisions. The decision to send the battle-hardened 6 Australian Division to Greece, instead of the less experienced 7 Australian Division, undoubtedly resulted in further delays. The Greeks wanted ten divisions, which was just unrealistic. Instead, they got two infantry divisions and an armoured brigade, equipped with A10 Cruiser tanks, most of which broke down.

They faced the German 12th Army commanded by Wilhelm List. He had three German corps, including 5 infantry, 2 Gebirgs (mountain) and 3 panzer divisions. List planned to invade through Bulgaria, which involved fighting through mountainous terrain and solid Greek defences on the Metaxas Line. The coup in Yugoslavia added new objectives for List, but it also enabled him to manoeuvre his panzer divisions more easily and by-pass the Metaxas Line.

The Allied campaign is described in detail starting with the breakthrough at Vevi, the battles for the Servia and Olympus passes and the actions at Platamon and the Pineios Gorge. I visited several of these battlefields in 2017, and they all offered strong defensive positions. The Australian and New Zealand troops are, rightly in my view, given credit in this study for the way they handled the withdrawal. The subsequent attempts to defend the Thermopylae Line and the evacuation to Crete and Egypt is also covered. While the Royal Navy did their best, German air superiority meant this was never going to be another Dunkirk. Nearly 14,000 allied troops were taken prisoner, and a further 903 were killed and 1250 wounded.

One point that struck me in the narrative was the grand tactical mobility of the British and Commonwealth infantry. They may not have had much battlefield mobility in the form of armoured vehicles, but once they got back to their trucks, they did have the ability to move fairly quickly, subject of course to the poor roads. This was in marked contrast to the Greek units, which had performed miracles against the Italians, but once out of the mountains were in deep trouble once outflanked by the Germans.

My first reaction when looking at this book was, ‘another book on the Greek campaign?’ We do of course have the official histories and even the semi-official books like Christopher Buckley’s ‘Greece and Crete 1941’. George Blau’s US Army study in 1953 is more balanced, using German records as well. In recent years we have had Matthew Willingham’s ‘Perilous Commitments; John Carr ‘The Defence and Fall of Greece 1940-41’; and David Brewer’s ‘Greece, The Decade of War’. There is a wonderful photographic study in the ‘Images of War' series and a detailed study of the air war by Christopher Shores and others. And those are just the ones that I can see on my bookshelves!

However, I do think this book brings something new to the subject. The campaign narrative looks at the battles from both sides of the hill and includes extensive quotes from memoirs and battle diaries. Arguably the best part of the book is Chapter 11, which looks at Operation Lustre in retrospect. This highlights the strategic failures of the Greek and British governments and the deployment errors in the region.

Taking a quick look at this campaign, you would assume it was another triumph for Blitzkrieg. In practice, it wasn't, with the Germans losing a lot of armour as they struggled to fight their way through the mountain passes of Greece. The British and Commonwealth troops made effective use of anti-tank guns and demolitions to slow progress, and their mobility and flexibility were impressive. This is confirmed by German views of the campaign.

So, I found myself carefully reading every chapter of this book, rather than skipping through what I thought I already knew. It is a worthy addition to our understanding of this campaign.

I have large wargame armies for this campaign in 10mm, 15mm and 28mm. There are many possible scenarios in the book for Bolt Action skirmishes, but the primary battles are probably best recreated in 15mm.