The latest in Osprey's Men at Arms series covers the Judeo-Turkish empire of the Khazars, which ruled much of the Steppes between the 7th and 11th Centuries AD.

Mikhait Zhirohov and David Nicolle outline the emergence of this state on the lower courses of the Volga and Don Rivers. They converted to Judaism in the 8th century, which placed them geographically and culturally between the Christian and Islamic states on their borders. They were probably Turks and were allied to the Bulgars and Alans. 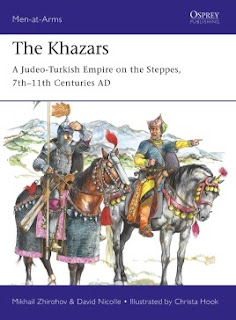 They fought a series of wars against Islamic states to the south in the Caucasus, as well as the Byzantines and finally the Russ in the north. The armies were mostly cavalry, some with heavy armour and others as light horse. The core of the army was organised on a feudal basis, but in the later period included paid troops and mercenaries. Armies could typically be as large as 40,000 men with the ability to call upon as many as 100,000. While mostly nomadic, they controlled settled areas and built some fortresses and could call upon town based militias.

They used a wide range of weaponry including bows, spears, swords, axes and war flails. The archaeological evidence for each weapon is described, supported by pictures, diagrams and colour plates by Christa Hook.

In 965 or 966 the Kievan Russ defeated the Khazars and took over much of their territory, other than a few successor states in the Crimea and Caucasus. By the standards of the Steppes, this empire survived for a very long period. They deserve to be better understood and this book is a good starting point.

I haven't got any Khazars in my wargame collection. I do have some of their allies, the Bulgars and the Slavs, who migrated into the Balkans during this period. I have recently been padding out this 15mm army with some Bulgar noble cavalry figures from the Essex range.