Ottoman Navy During the Napoleonic Wars

I have been playing Black Seas a bit lately, mostly with French and British frigate squadrons in the Adriatic. The game plays well, without all the detail that all too often slow up traditional Napoleonic naval games. Warlord hasn’t expanded the fleet options to the Ottomans yet, so a bit of improvisation is required. After some research, not much was needed to adapt the existing ship options.

By the start of the Napoleonic period, the Ottoman navy was in a pitiful state. The great traditions that made it feared during the Renaissance period; the natural harbours, the sailors and natural resources had been neglected. This culminated in the Battle of Cesme in 1770 when the fleet was all but destroyed by the Russians.

The reforming Sultan Selim III inherited a rebuilding programme, which used modern British and French designs to construct a fleet of 22 ships of the line, 15 frigates and many smaller ships. This was both a blue sea navy and gunboats to operate on the great rivers of the empire. He appointed Kucuk Huseyin as Kapitan Pasha and attracted officers and technicians from abroad as well as reintroducing conscription and tackling corruption. By 1800, the fleet had 30 ships of the line and 50 frigates and brigs.

The war against Russia resulted in funds being diverted to the army, and the navy once again went into decline. Sultan Mahmud came to the throne in 1808 and strengthened the navy so it could once again challenge the Russians in the Black Sea.

Ottoman ships were mostly of French design, although they had more headroom below deck to allow for the turbans of officers! More traditional eastern designs were used for coastal and river warfare, including oar-powered galleys. In 1799 the flagship, the Sultan Selim, mounted 120 forty-two pounders and at least ten more of smaller calibre, with a crew of 1400 men. The reforms included a naval academy and a system of ranks based more on ability than bribery.

Sailors came mostly from the Ottoman Empire’s Greek subjects, who were as good as any in the world. However, the weakness of the officer corps made fleet manoeuvre difficult and so the Ottomans choose to defend inlets, swinging their ships on the anchor chains. Fleets were often supplemented by large numbers of oared gunboats. Marines were provided by the 31st Orta of Janissaries, supplemented by two units of naval riflemen.

The Ottomans could also call upon irregular naval forces, particularly the Barbary Corsairs. The British allied with them for the use of ports and even ship repair facilities. Other western states, including Denmark and the United States, fought wars against them. The Barbary States had conventional frigates, brigs and sloops as well as xebecs and galleys. For example, Algeria had five smaller frigates, three xebecs and seven galleys.

For wargamers who like to name their ships, here are a few examples:

At different times, the Ottomans fought with and against most of the naval powers. The main protagonists were the Russians. However, on occasion, they were allies against the French, as at Corfu in March 1799 and Ancona in Italy later that year. After being allied with the British in the recovery of Egypt, the Ottomans declared war in 1807. Admiral Sir John Duckworth attacked Istanbul, but after destroying an Ottoman squadron is forced away by shore defences. The USA made several attempts to defeat the Barbary States, finally succeeding in 1815.

My Ottoman fleet so far includes a 3rd Rate, a frigate and two xebecs. That is plenty for an evening game, but today we had an afternoon at the club, so time to deploy bigger fleets. A fun game, if a bit confused, with more collisions and entanglements than sinking. It confirms my view that Black Seas is best played with a small squadron on each side. The models are all from the Warlord range, except for the xebecs, which are from Hagen Miniatures. 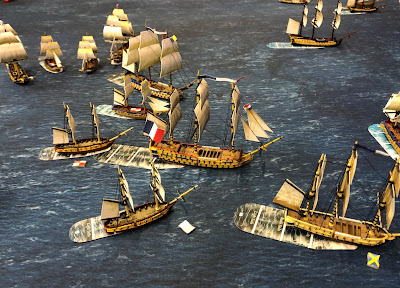 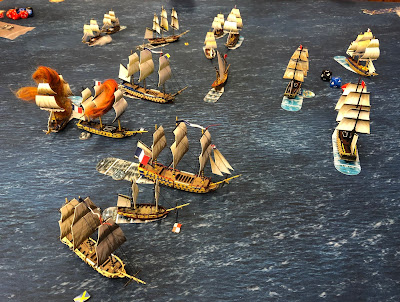 P.S. There is a slightly longer version of this on the Balkan Military History website.