This is a new book by Chris Flaherty on the uniforms, tactics and organisation of the Napoleonic Ottoman Army, published by Partisan Press. 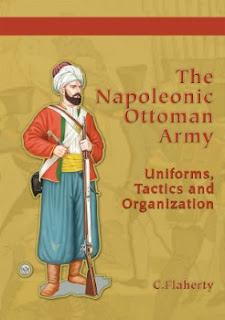 Books on this subject are rare. William Johnson published 'The Crescent Among the Eagles' in 1994 and a summary booklet, but otherwise, the Ottomans get only a passing reference in general works or mentioned in relation to specific campaigns, such as the Egyptian campaign. Virginia Askan 'Ottoman Wars 1700-1870' is an excellent study of the wars, organisation and tactics.

The strength of this book is the detailed description of the units, and there are a lot, as well as being lavishly illustrated by the author, Bruno Mugnai and the late Bob Marrion. For the wargamer, this is the must-buy book.  I only wish he had written it when I was collecting my armies!

The author takes us through each of the troop types starting with the Janissaries and the commanders. He then covers household cavalry and the Sipahi, before moving on to the many irregulars, including the Bedouin and Tartars. The army had a bewildering number of infantry types based in the provinces and these are all covered as well as attempts to reform the army through the Nizam-I-Cedid.

The weaponry and equipment of each troop type are described along with the tactics they adopted. This includes defensive formations and entrenchments. One somewhat bizarre tactic used by a Janissary orta was to dress a handful of younger soldiers as women, place them in a tent called the harem with a special guard. It served as a regimental talisman to be defended to the death.

The Ottomans used a huge variety of artillery as well as gradually reforming the field artillery under French guidance. These included massive stone (often marble) firing cannon. While these may appear to be a medieval relic, they did substantial damage to a British fleet in 1807.

The author even covers obscure support units such as the water carriers and the religious officers. In 1801, the engineer Selim Efendi trialled balloons for military purposes. That is a unit I must have!

While the navy is not covered in detail, the river flotillas are, as well as navy crews and ranks. Very useful for my current Ottoman navy project.

This is a beautiful book, printed on high-quality paper to show off the many illustrations at their best. Highly recommended.