Midnight at the Pera Palace

The Pera Palace Hotel in the modern Beyoglu district of Istanbul is the rather loose link in Charles King's story of Istanbul between the two world wars. 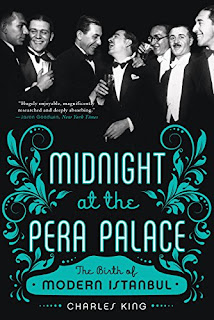 At the end of WW1, the Ottoman Empire had been defeated and dismembered. Istanbul became a melting pot far removed from the rest of the country. Russian emigres from Bolsheviks made up a growing part of the population together with the peoples of many nations and races. Non-Muslims were the mainstay of Istanbul’s economy and culture. They were its barkeepers and bankers, its brothel owners and restaurateurs, its exporters and hoteliers. As late as 1922, Greeks still owned 1,169 of 1,413 restaurants in the city, compared with 97 owned by Muslim Turks, 57 by Armenians, and 44 by Russians. As King says:

"In the process, the former Ottoman capital came to reflect both the best and the worst of what the West had to offer: its optimism and its obsessive ideologies, human rights and the overbearing state, the desire to escape the past and the drive to erase it altogether. When visitors complained that the old Istanbul seemed to be slipping away, what they meant was that Istanbul was coming to look more and more like them."

During the allied occupation after WW1, the future President of the Republic, Mustafa Kemal, stayed in the hotel sounding out the British for a job. He left after six months to greater things and left behind a chaotic administration. A situation the British governor was only to please to extricate himself from.

The Turkish Republic that emerged from the war with Greece was a nationalist state bent on modernisation. The capital was moved to Ankara, dress regulations changed and even the calendar and clocks were brought into line with Europe. Those Greeks and Armenians not covered by the population exchanges had their properties seized, including the Pera Palace Hotel. These intentionally reduced the visibility of minorities.

Ernest Hemingway had worried about what would happen to Istanbul’s nightlife once the Muslims took over the city. He had no cause to worry as Istanbul's nightlife became famous across Europe with new bars, clubs and restaurants opening daily. Not to mention the easy availability of illicit drugs and brothels. There were 175 brothels in the city and somewhere between 3,000 (police estimate) and 40,000 (British estimate) prostitutes. In 1930 the government banned new brothels and gradually introduced regulation, but didn't bar them.

Music (particularly jazz), films and other forms of culture also developed in the inter-war years. Women not only abandoned the veil but increasingly played a role in commercial, cultural and civic life. However, political life was quickly closed down as the Kemalist government became as dictatorial as Italy, Germany and the Soviet Union. There were 18 uprisings before WW2, all put down with great violence as Turkishness became the new state doctrine.

Before and during WW2 Istanbul again became a centre of intrigue as Turkey attempted to remain neutral. “You could almost throw a stone out of the window of any leading hotel and hit an agent,” recalled an American official about wartime Istanbul. The hotel was even damaged by a suitcase bomb, probably aimed at British embassy staff who had left Bulgaria. SOE had a base in Istanbul and later the American OSS did the same. By 1944 whenever a group of Americans came through the door of a club the band would play, “Boo Boo Baby I’m a Spy".

Official policy tacked with the winds of war. Istanbul again became the destination for refugees. Initially, German Jews strengthened the teaching staff of universities, but later the government resisted waves of Jewish refugees from eastern Europe, many seeking a route to Palestine. This led to tragedy, including the sinking of the Struma with nearly 800 passengers on board. In all, from 1942 to 1945, a total of 13,101 Jews went via Turkey to Palestine and other destinations.

Even today the Pera Palace Hotel uses its amazing history in its marketing, although glossing over the visit of Joseph Goebbels! More recently Istanbul has shown its independent streak in local elections and it remains different from much of the country.

This book is the story of how Istanbul became a modern city and tells us much about Turkish history at the same time. Well worth a read.