Red Wind over the Balkans

This is a new study, by Kaloyan Matev, of the Soviet offensive south of the Danube between September and October 1944. The sister of the better-known offensive into Romania and Hungary to the north. 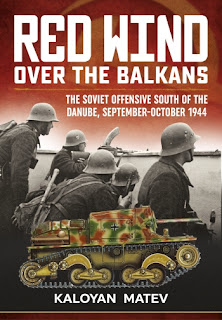 This campaign had two distinct phases. The first was the invasion of Bulgaria - really just an occupation as the Bulgarian armed forces did not resist. It is often forgotten that Bulgaria never actually declared war on the Soviet Union and its forces only participated in the occupation of Yugoslavia and parts of Greece. Bulgaria's historic concern was more with the massed Turkish divisions in Thrace than with Russia.

The second phase was the offensive over the Bulgarian border into Yugoslavia towards Belgrade. This was spearheaded by Soviet troops of the Third Ukrainian Front. The German army was withdrawing from Greece and therefore desperately needed to at least slow down the Soviets in the Balkans. The Bulgarian army was used to swing further south in offensives into modern North Macedonia and Kosovo.

The terrain in this part of Yugoslavia (modern Serbia) is mountainous, with limited road and rail communication. The Germans used their flexible battle-groups to hold the key positions and these included mountain trained troops. Soviet rifle divisions are not noted for their flexibility, with the common perception being massed frontal attacks. However, the author shows how they managed to fight effectively in terrain they were certainly not trained to operate in.

There was armoured and air support as well as artillery, which operated in challenging conditions. I was particularly impressed with the way Soviet gunners pulled their guns up the hills to outflank German positions.

For a campaign that only lasted a couple of months, you might expect a light tome. You would be very wrong! This is a monster of a book with some 650 pages and weighs a ton. I like to read in an armchair in my study, and it was something of a challenge to read this comfortably.

The reason is the immense amount of detail. We get an introduction to the Balkans prior to the Soviet offensive, including an analysis of the different armed forces. Then a detailed description of the operations and an analysis of how the armed forces, land and air, operated. Extensive tables, breakdown units and equipment in great detail. The author has accessed German, Bulgarian and Soviet archives to get a balanced picture. The book is also profusely illustrated with more than 400 photos, many never seen before, plus colour plates and maps.

If this sounds a little dry, and it can be in places, the author has inserted extracts from memoirs and diaries of the combatants.

This is perhaps not a book for the general reader, but for anyone with an interest in WW2 combat actions at the operational level, it can only be highly recommended. I will be dipping back into this book for game scenarios and other research.

Reading this book inspired me to get back to my 28mm Soviets. The latest units have been sitting on the painting table undercoated, while other projects have marched on. The figures are from Bad Squiddo and North Star. Of course, I will now have to find some Bulgarians!