Where the Eagle Landed

This book by Peter Haining describes the measures taken in 1940 to resist a possible invasion of eastern England. In particular, it deals with a number of rumours and speculation that German units actually landed in East Anglia. 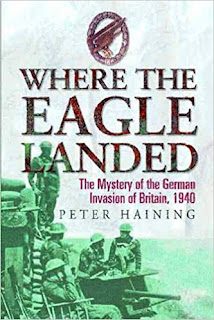 This book was written in 2004, although topical this year in the 80th anniversary of the Fall of France and planned Operation Sea Lion invasion of Britain. The GDWS display game planned for the Falkirk Carronade show in May was based on a 'Dad's Army' scenario. Sadly, that show has had to be cancelled, but the game may make an appearance at a show later in the year - events permitting!

The first half of this book is an overview of Operation Sea Lion and the measures taken to thwart it. There is a focus on some of the less orthodox plans including the work of the Department of Miscellaneous Weapon Development (DMWD) - nicknamed the Department of Miscellaneous Wheezers and Dodgers. This department received many bizarre inventions. I liked the story about the proposed ballon mounted death ray to be fired at landing craft, presented in great detail by the proposer. The only bit missing was the death ray itself. When asked, the proposer gave a knowing wink and said, "Oh, there is no need to worry about that. The Admiralty has access to secret archives and there are bound to be several death rays there. Just take your choice."

The second half deals with various stories that have been written about alleged incursions on the coast of East Anglia. These range from parachutists, to burned corpses, to weapons testing and more. Most are almost certainly untrue. The legend of a small hamlet called Shingle Street is the centre for a number of these stories as it was evacuated.

The author concludes that one incident is true. The water off the coast of East Anglia was known as E-boat Alley, due to the success in the early war period of German Schnellboots. It seems likely that S21, commanded by Leutnant zur See Bernd Klug made a landing at Sizewell on the night of 28 July 1940. They had a picnic on the beach and beat a hasty retreat when spotted by a Motor Gun Boat. I walked along these beaches during a work visit to Sizewell nuclear power station some years ago, so I can just picture the scene.

This apparently means they deserve the footnote in history as the eagles who achieved what no other German managed during WW2. They landed on English soil. If you think this is a bit thin to base a book on, you may well be right.

In fairness, the research is entertaining, including a Chief of Staffs memo on the possibility of Hitler tunnelling under the Channel. I seem to recall that Napoleon had a similar plan. However, my favourite is the claim by the leader of Britain's witches that they helped halt the invasion. In 1940, covens of witches conducted ceremonies around the coast, projecting a cone of power directed at Hitler's brain with the message 'You cannot cross the sea" and similar. So there you have it!

I wouldn't put this book on the top of your reading list, but if you're looking for a bit of background colour for 1940 games, it's worth a read.