'Commando Crusade' is the wartime memoir of Major-General Thomas Churchill. No relation to Winston, although the Germans, who captured his brother, briefly thought he was. 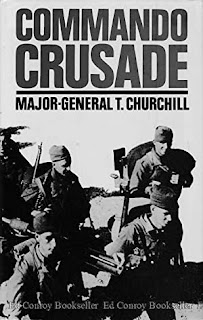 Born in Surrey, his father was a colonial civil servant. He had a conventional start in life for a British officer - public school, Sandhurst and a commission in the Manchester Regiment. He fought in the Burma Rebellion of 1930 and then specialised in air photography.  He went to France in 1940 with the BEF and after a short illness was posted to the operations and intelligence staffs.

Back in the UK working for Headquarters, Home Forces, he started to assist the early commando formations with air photography, before joining the commandos in 1942. Interestingly for me, he was based in my current home town of Troon and other parts of Ayrshire.

His commando was posted to the Mediterranean, where he took part in the invasion of Sicily and the landings at Salerno. By the time of the Anzio landings, he was commanding a commando brigade.

It was here that he was asked to provide a unit to assist the Yugoslavian partisans in the defence of the Adriatic island of Vis in the autumn of 1943. He sent No.2 Army Commando commanded by his brother Jack Churchill. He later set up his command on the island and the best part of the book relates to the initial defence of the island and then the raids organised from that base.

I spent a very pleasant week on Vis a few years ago and have visited most the sites he mentions. The island, previously known as Lissa, has a fascinating history, including a British occupation during the Napoleonic wars. I have read several memoirs of officers who served on Vis, and there is a high degree of consistency, not to mention admiration for the partisans who fought there. Tito was also based on Vis after the Germans nearly captured him at Drvar.

This is an excellent memoir, written in a very unassuming style, illustrated with plenty of the author's wartime photographs. I see some US bookshops are selling this book, published in 1987, for £160! Very happy to have picked up my copy for £5!