Serbia Under the Swastika

This book by Alexander Prusin takes a rare English language look at the WW2 occupation of Serbia. It is also an objective study in what is still a controversial subject given the role of collaborationist groups and the internecine civil war. 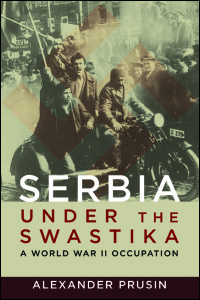 The author starts with a succinct look at Yugoslavia before the war and the events that led to the German invasion, supported by Hungary, Bulgaria and Italy - all of which grabbed territory. The Germans had no real territorial ambitions in Serbia and their primary concern during the occupation was to secure lines of communication to Greece and exploit Serbia's mineral reserves, particularly copper and lead. Serbian mines provided 50% of the lead and 98% of the aluminium of Germany's total consumption.

Nazi racial policies played a smaller part in the occupation than in other parts of Eastern Europe. Serbia didn't have a role in Hitler's Lebensraum policy, where mass murder created the living space he desired. The small Jewish population was subject to the Holocaust as were the Roma and communists. The Nazi racial stereotypes regarded the Serbs as traitorous and prone to erratic behaviour - "a born plotter and conspirator, infatuated with underhanded actions". Comical if it wasn't for the deadly consequences.

The main collaborationist leader was Nedic who led the puppet government. He was a conservative, who modelled himself on Petain - collaboration for reasons of state rather than ideology. Serbian fascists like Ljotic and the Zbor movement did serve in the government, and both groups evolved similar ideologies based national and traditional Serbian values. Many thousands of officials and policemen collaborated as well in the special forces. Recognising the consequences of German defeat, they became ruthless participants in the German terror system.

German policy largely reverted to terror, rather than adopting Serbian right-wing groups more widely. There were officials who advocated a more constructive approach, but even small steps were overruled by Hitler. Atrocities were not limited to SS Einsatzgruppen. In Serbia at least, the Wehrmacht became a willing partner in the repressive apparatus.

The resistance was based on two main groups - Mihailovic's Chetniks and Tito's partisans. There was an early attempt at cooperation, but Mihailovic decided that the communists were a bigger threat to his ideology than the Germans. This lead to increasing collaboration with the occupying forces, including participation in military action, although it was never absolute and the Germans attacked him as well. The Allies eventually realised that the partisans were the only resistance groups fighting the Germans consistently, and shifted their support.

Most people in Serbia, as with the rest of occupied Europe, adopted a survivalist mentality. Only about 4 per cent were associated with resistance or collaboration. The vast majority understandably tried to seclude themselves and their families from the conflict. One million Yugoslavs died, 6.3 per cent of the pre-war population, compared with German losses of 14,100. Serbia had between 141,000 and 167,000 deaths - double that number were deported or imprisoned. A testament to the scale of German reprisals and the civil war.

This book is a comprehensive and succinct study of the occupation of Serbia in WW2. Pretty harrowing in places, but well worth reading.