Armies of the Italian-Turkish War

This is the latest in the Osprey Men at Arms series by Gabriele Esposito covering the little known Italian-Turkish War 1911-12. 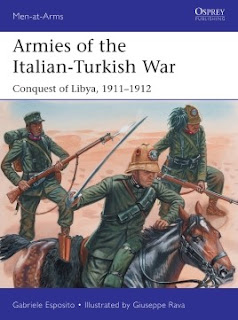 The Kingdom of Italy was fully unified in 1870 and so was late to the scramble for colonies. After failing to acquire Tunisia, Italy moved into the Horn of Africa. However, an attempt to expand into Ethiopia came a cropper at Adowa in March 1896, when the invasion force was destroyed with 11,000 casualties. With the British in Egypt and the French in Tunisia that only left Libya, which was the last remnant of the Ottoman Empire in North Africa.

The Italian expeditionary force consisted of a two division corps supported by strong naval forces. The Ottoman garrison was a weak division with understrength units. The Italian Navy was one of the most modern in the world and hugely outclassed the Ottoman Navy. This allowed the Italians to land on the coast in September 1911, largely uncontested, and occupy the capital Tripoli and key ports including Tobruk.

The Ottomans withdrew from the coast and reorganised around nearby wells. To the surprise of the Italians, local forces rallied to the Ottomans, which enabled a number of counter-attacks most successfully at the Battle of Sciara Sciatt on 23 October 1911. This forced the Italians to reinforce the campaign with a further division and additional corps troops.

By spring 1912, having failed to achieve a decisive victory in Libya, the Italians used their naval strength to capture islands in the Aegean and the Dodecanese, although an attempt to force the Straits failed. This placed additional pressure on the Ottomans who were coming under pressure in the Balkans. The opening of the First Balkan War in October 1912, forced the Ottomans to sign the Treaty of Lausanne, which recognised the Italian occupation. The Italians were supposed to leave the Dodecanese but failed to do so, knowing that the Ottomans were too weak to eject them.

A number of Ottoman officers continued to support local resistance in Libya along with the Senussi uprising, which wasn't suppressed until the 1930s. The cost of the war was ruinous to the Italian economy, putting the country's development back ten years.

This book has all the key elements we have come to expect from the MAA series. A potted history of the war, full orbats, and a chapter on the organisation of both armies. There are period photographs and excellent colour plates by Giuseppe Rava.

I am not aware of any specific figure ranges for this war. However, it wouldn't need a lot of conversion from Italian pith helmeted WW2 and Ottoman WW1 figures. For board gamers, Strategy and Tactics 325 will cover this war.