The Long Range Desert Group in the Aegean

The Long Range Desert Group (LRDG) are best known for trekking around the western desert in jeeps and trucks, guiding raiding parties and gathering intelligence. However, they fought in other settings, and this new book by Brendan O’Carroll (Published by Pen and Sword) covers operations in the Aegean, or more specifically during the Dodecanese Campaign in November 1943. 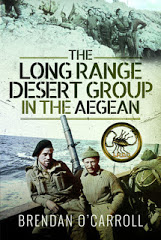 There have been many good books on this campaign, which has been fairly described as ‘Churchill’s folly’. Most focus on the main battles on the islands of Leros and Kos, where inadequate infantry forces were deployed without proper air or naval cover. As a consequence, they were quickly defeated by German counter-attacks.
This book focuses on another aspect of the campaign. The role of small parties of LRDG soldiers who were landed on most of the islands to gather intelligence and later to support the fighting, or on at least one occasion, wrongly used as conventional infantry. Many of these highly trained and resourceful servicemen came from New Zealand. The author has painstakingly researched each of the actions from the war diaries, memoirs and later contributions to the journals of the LRDG Associations.

I first came across their story reading W.E Benyon-Tinker’s book ‘Dust Upon the Sea’, which described the tough conditions they operated under. Being dropped on a small island with limited rations, operating for long periods without washing, led to a range of medical conditions. On the ground, the fighting was often at close quarters in which the lightly equipped LRDG fought at a disadvantage against German mortars, snipers and co-ordinated attacks from the air.

The author gives an overview of the other units fighting in this campaign and the Germans. The invasion forces were elite units like the Fallschirmjager, Brandenburgers and Gebirgsjager, all of whom respected the LRDG. They were quickly replaced by garrison troops who were typically older, poorly equipped units, often regarded as politically unreliable. In the air, aircraft like the Stuka were able to operate largely without challenge, bar the occasional sortie from P38 fighters based in Libya. Some of the Italians stood their ground when the Germans attacked, but many did not. In fairness, they had more to lose when captured as many, particularly the officers, were executed.

For my own research, it was interesting to note how often Turkish waters were used to shelter in and the assistance they received from the Turkish police. The modern resort of Bodrum was as familiar to Commonwealth troops in 1943 as it is to British tourists today.

The other key takeaway from this book was the support from the Greek islanders. They provided guides, food and did everything possible to help the Allied troops. All the more remarkable given the fatal consequences if they were caught.

There is an outstanding amount of detail in this book, perhaps on occasion too much for the general reader. However, it covers an often missed aspect of this campaign and pays due credit to some courageous and resourceful men.
Posted by Balkandave at 22:20