This book by Anthony Tucker-Jones covers the invasion of Southern France in 1944, originally called Operation Anvil until changed to Operation Dragoon when it was delayed, negating the anvil to Operation Overlord. This is a book of two halves. The strategic debate over the benefits of the operation and the campaign itself. 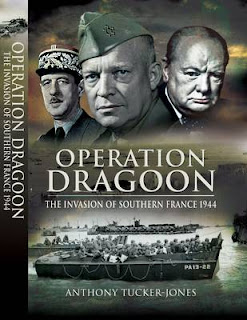 For me, the strategic debate is the most interesting part of this study. Churchill, the champion of the Meditteranean strategy was resolutely opposed to the campaign, supported by his generals. He viewed it as a diversion of resources from the Italian campaign, which he wanted to extend into the Balkans before the Soviets could get there. The Americans led by General Marshall were the strongest advocates, supported by De Gaulle who saw it as an opportunity to deploy the newly raised French divisions in the liberation of France.  Stalin was also supportive because it kept Allied forces out of the Adriatic and the Balkans.

Eisenhower, the classic coalition general, did his best to keep the peace, even though he knew he did not have the resources, particularly landing craft to mount Overlord and Dragoon at the same time. Many years later he was to concede that Churchill might have been right. He described the row with Churchill as "one of the longest sustained arguments that I had with Prime Minister Churchill throughout the period of the war."

Not all the Americans were on board, including Eisenhower's Chief of Staff, Walter Bedell Smith. General Clarke recorded in his diary; "The Boche is defeated, disorganised and demoralised. Now is the time to exploit our success. Yet, in the middle of this success, I lose two corps headquarters and seven divisions. It just doesn't make sense."

In the end, Eisenhower said no to Churchill and the campaign was launched two months after Overlord. German troops had already been drawn north to Normandy leaving a very thin crust of largely second-rate divisions defending the coast. The campaign was an initial success with French and American forces capturing Toulon and Marseilles in just 14 days, well ahead of schedule. They took 100,000 prisoners at a cost of 13,000 Allied casualties. However, many units did escape into Germany and the French and American divisions had a grim slogging match to get through the Belfort gap into Germany. Axis units from France contributed to what the germans dubbed 'the miracle in the west', stabilising the front before the West-wall.

The campaign did provide useful ports to supply Eisenhower's broad front strategy, but it did little to take the pressure off the Soviets. Overlord did that, and Operation Bagration was probably the most successful operation of the war.

The author concludes that Dragoon was an unwanted distraction and should have been cancelled or maintained as a threat. The logistic resources would have been better deployed in support of Overlord. It remains doubtful if it would have made any difference in Italy, where the Allies failed to breakthrough until the end of the war. A campaign through the Brenner Pass into Austria would have been very ambitious. Churchill remained of the view that a much bigger opportunity had been lost and the world became a much worse place for it.