This is a new book by Andrew Rawson outlining the conflicts in the Balkans during the twentieth century. The Balkan wars of the 1990s sparked many books on Balkan history, of which Misha Glenny's epic work, 'The Balkans', is probably the best known. So, it is probably time for another look at the region as a whole. 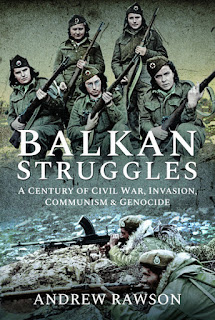 Rawson limits the scope of this history to the twentieth century. The century began with the tail end of the previous century's nationalist struggles, as nations emerged from the long period of Ottoman rule. This reached a climax in the two Balkan Wars, which saw the Ottomans reduced to a foothold in the Balkans and the first of many wars in which the new states turned on each other. The Balkan Wars were, in many ways, a warm-up for the First World War, which started and arguably finished in the Balkans.

The post-war division of the spoils simply prepared the ground for the next conflict. To which was added great power rivalry, led by Mussolini's colonial ambitions, realised in Albania's occupation. He later threatened Yugoslavia and invaded Greece. This, along with a need to secure the natural resources of the Balkans, led Hitler into the Balkans as a prelude to his invasion of the Soviet Union. The Allies made some attempts to hold back the tide, most notably in Greece, without success. The Allied response included supporting resistance struggles in all the Balkan states. Most of these conflicts were as much about preparing for the post-war order as they were about fighting the Axis.

As Allied strategy moved to liberate Europe through north-west Europe, the Red Army steamrollered through the Balkans, effectively imposing communist states. The exception was Greece, which lurched back to fascism through a right-wing military coup. Tito's death awakened nationalism in Yugoslavia, leading to the Balkan wars of the 1990's - some of the bloodiest conflicts in Europe since WW2. With the end of the Cold War, other countries ended the century by returning to democracy, albeit with a legacy of economic and territorial issues unresolved.

This book is something of a whistlestop tour of these momentous events, neatly broken down into short sections within the chapters. The brief treatment of complex issues does result in some oversimplification. For example, the numbers killed in post-war Yugoslav retribution are highly contested, and it might have been better to give a range of figures rather than plump for the upper estimates. The book possibly lacks a theme to bind the narrative together, other than simply death and destruction. Of which there was a lot. Another might be how political and ethnic extremes so often came to the fore, along with often unhelpful interventions from outside.

In many ways, the Balkan peninsula is a fascinating region, the crossroads of history throughout the ages. That crossroads was particularly busy and bloody during the twentieth century, and this book is a useful starting point for anyone beginning a journey of discovering its rich history.