Taranto and Naval Air Warfare in the Mediterranean 1940-45

This is a new book by David Hobbs looking at naval air warfare in the Mediterranean during WW2. This includes off carriers and from land bases. Unlike the Pacific or the Atlantic, few parts of the Mediterranean were not within the land-based Axis aircraft range. This created very special problems for the small carrier force available to the British during the early years of the war. They fought against considerable odds, and their story deserves this excellent book. 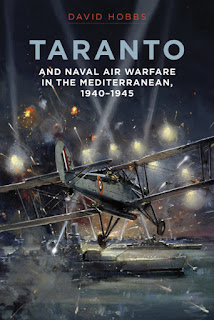 The Fleet Air Arm had only just been returned to the Royal Navy at the war's outbreak. It included the carrier-based aircraft, but the few RAF maritime reconnaissance aircraft were not trained to operate with the fleet. The development of ship-based radar helped as the war progressed, but communications were limited at the war's outset. Like most naval commands, airpower's impact on the fleet was underestimated, and this was reinforced by ineffective high-level bombing from the Italian air force. However, when the German JU-87 dive bombers arrived, it was a very different story, and there was quickly a demand for a higher proportion of naval fighters to fly combat air patrols.
The carrier HMS Eagle was stationed in the Med, and in August 1940 it was joined by the modern carrier HMS Illustrious. This allowed the fleet to undertake the famous night attack on the Italian fleet at Taranto. The attack was delivered by Swordfish torpedo bombers, who look like WW1 vintage aircraft but were actually well suited for the task. Three Italian battleships were seriously damaged, half of the capital ships in the fleet. The Japanese and others took careful notes!
The Ark Royal was also in the Med by late 1940, although its focus was on supporting convoys to reinforce Malta.  Albacore, Fulmar, and Skua aircraft provided some more modern types, but their performance was not the equivalent of Axis land-based fighters. This was a problem that dogged the fleet throughout the war. The Sea Hurricane and Seafire were an improvement, but only a stop-gap before specialist aircraft started arriving at the end of the war.
At times, there were no operational carriers in the Med, and the naval air squadrons operated from land bases along the North African coast. For example, by the end of 1941, 830 NAS had attacked 80 enemy ships with torpedos sinking or disabling some 200,000 tons of Axis shipping. 821 and 826 NAS played a key role in night operations during the Battle of El Alamein.
The admiralty eventually accepted the importance of carriers even in the confined waters of the Med. Apart from the strike potential, fighters could deploy continuously to defend fleet operations. They were also important in anti-submarine warfare. In 1942 some 20 German and 60 Italian submarines were operating in the Med.
Carriers were deployed to support the landing operations in Sicily and mainland Italy. Defending the ships, bombarding the coastline, and interdicting Axis troops on land. By February 1944, smaller escort carriers joined the fleet, some using US-built aircraft such as the Martlet, Wildcat, and Hellcat. These took part in carrier operations in the eastern Mediterranean before the Germans abandoned the islands and retreated through the Balkans.
Books on air warfare can be a little hard going. This squadron took off, attacked the enemy, so many were lost, etc. However, this book has a pacier narrative, interspersed with a really useful analysis of the Fleet Air Arm challenges and personal stories. It is profusely illustrated with period photographs that are relevant to the text. It is an excellent read.
I have to admit to being a poor sailor on the tabletop, although I have been attracted back to naval wargames through games like Cruel Seas. Even if I have a tendency to crash ships or sail them off the table - why won't ships just turn around like tanks! The fleet operations in this book need to be gamed at a higher level. I like the rules for Victory at Sea but hate the ugly looking bases on the models. So, it's 1:3000 scale for me, and an order has gone off to Navwar.