This is Robin Denniston's study of diplomatic decrypts, the Foreign Office and Turkey between 1942 and 1944. Most people are now familiar with Ultra thanks to films like 'Enigma', and 'The Imitation Game'. However, the British had a long history, going back to before the First World War, of decrypting diplomatic messages. Churchill had used these throughout his political career, and they played an important role in his policy towards Turkey in WW2. 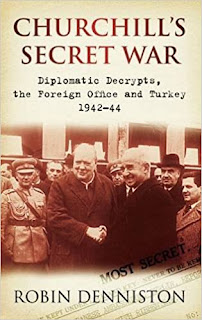 Little attention has been given to the British achievements in obtaining intelligence by intercepting letters and telegrams and breaking the diplomatic cyphers of neutral and friendly nations and its impact on foreign policy conduct during the Second World War. Turkey was the most powerful neutral, for historical and geographical as well as strategic reasons, and Churchill had a particular focus on getting Turkey into the war. Interestingly, the Foreign Office's Southern Department, which saw the same decrypts, did not share his enthusiasm. They rightly decided that Turkey was going to stay neutral. As the author says, "Churchill’s wish to get Turkey into the war was not based on geopolitical reality but on a mixture of hope and desperation."

The author explains how the British obtained these decrypts, largely via the British company Cable and Wireless, and how they were decrypted and analysed. They include not only Turkish messages, but those of other countries as well. The messages from Japanese ambassadors are fascinating, given their access to Axis thinking. He then takes the reader through the main stages of Britain's diplomatic and military relations with Turkey during the war. Turkish neutrality meant having a foot in both camps but with one more firmly placed than the other.

Turkish policy, as viewed through these decrypts, shifted somewhat during the war. At the outbreak of war, they were formally allies of Britain and France. When they were being encircled by the Axis in Russia and the Middle East in 1942, their policy moved towards the Germans, although not the Italians. By 1943, their policy shifted once again towards the Allies, eventually breaking economically and diplomatically with Germany, and then declaring war in February 1945.

These decrypts provide a fascinating insight into Allied and Axis policy at different stages of the war. However, the author concludes that they do not rewrite history. These decrypts provided Churchill and others with broad context, not instant tactical information that could be used on the battlefield.

This book may not be for the general reader. However, if you are interested in WW2 strategy, it is available at a bargain price on Kindle and in paperback, so is worth a look.