On this day in 1381, Richard II and his entourage killed Wat Tyler, one of the leaders of the Peasants' Revolt at Smithfield in London. I do like a bit of revolution, and as Wat (son of = Watson) is one of the derivations of my surname (albeit my family hail from Scotland), I have always felt a bit of affinity with Wat Tyler.

There were several causes of the revolt, including unpopular laws restricting the ability of labourers to move around the country seeking higher wages and the Poll Tax to finance the war against France. The Radical History channel has a fun YouTube video that is worth a look. All of these measures were viewed as hitting the lower orders more than the noble lords. The revolt broke out in Essex and quickly spread to Kent and parts of Norfolk and Yorkshire. The main events took place in London, where the 'commoners' gained support from the working class and some of the richer citizens. On Tower Hill, the rebels (this group led by a woman) beheaded five men, including The Chancellor and the Archbishop of Canterbury. You can read the time line and a good summary on the History Extra website.

The traditional view is that the insurgents were a disorganised rabble of rural labourers. However, a new project, 'The People of 1381', has analysed a database of records to reveal a much more complex picture. It appears the rebels consisted of several different groups, including veteran soldiers of the wars against France. They brought skills of planning and strategy that may explain the coordination and organisation that managed to bring diverse groups to London at the same time. The project identifies several named veterans who had military experience of this type.

The rebels are also described as acting in a warlike manner, raising banners and using weapons with lethal force. When they got to London they made for the stores in the Tower of London to take armour and weapons that they clearly knew how to use. They may also have used a trebuchet to attack a defended house, a skill that could only have be learned in military service. Ironically, a number of the rebels later served again in the 1383 campaign in Flanders, led by Henry le Despenser.

The revolt may have failed to achieve its goals including an end to feudalism, but it paved the way for its decline. In the decades that followed, there were fewer people bonded to their lords in serfdom and landowners were fearful of their workers rising against them.
So, on to the table top. More of a scuffle than a battle using Lion Rampant rules. The Royalist forces at the top and the rebels coming from the south. 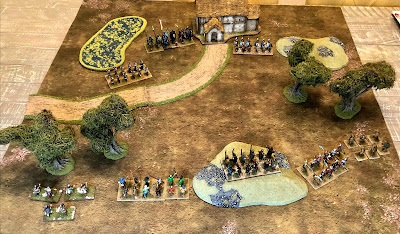 Sadly, Wat and his band of serfs didn't last long. The crossbowmen quickly shot them to pieces and they ran off. Revolutionary fervour only goes so far! 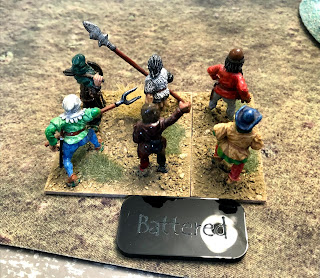 However, all was not lost. The Royalist men-at-arms thundered across the table and up the hill after the archers. They had three goes at it, but attrition won the day. The rebel spearmen also defeated their opposite number with a bit of help from the bidowers. Victory for the rebels! 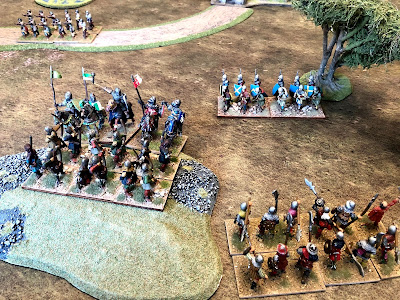