If I was pairing an opponent with a Viking, my first thought would be Anglo-Saxon. Mainly as I am a few episodes into the new series of the Last Kingdom on Netflix. However, Noah Tetzer has chosen Franks for this matchup in the Osprey Combat series, an often forgotten contemporary of the Vikings. However, another TV series, Vikings, does the siege of Paris and Rollo being granted Normandy very well. 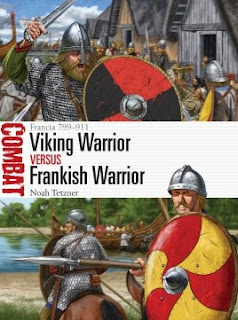 As with others in this series, after some introductory context, the opening chapter gives an outline of both sides. The Vikings have been covered extensively elsewhere, so I was more interested in the Franks. The author covers how the Franks responded to the early Viking raids in the context of their own internal and external struggles. The Carolingians split the empire among the sons of the Emperor, which was a recipe for conflict. Viking and Frankish warriors were similarly armed, but they had a very different ways of fighting. The Vikings did shield walls, but they favoured looser lines against the Frankish close-order battle tactics. They also had some distinct uniform features, which will help distinguish them on the tabletop.

The Franks had regional and royal armies, unlike the Vikings, who generally came together as groups of brotherhoods (sodalidates) for a specific campaign. I didn't realise that these brotherhoods often shared a common tattoo or even engraved their teeth with horizontal file marks. My dentist would disapprove! The Frankish levy was called the lantweri and could include men normally forbidden to bear arms. I suspect their military effectiveness would have been limited.

Battles and sieges were rare, which makes this period suitable for skirmish games, Saga and Lion Rampant for me. However, some Viking fleets could be as large as 120 longships with Ragnar along the Seine. We often think of Viking archers as being on the fringe of their armies, but they were particularly important in sieges. A Norwegian law stated that a bow should be provided for every two warriors on the ship levies. The Franks tried fortifications on the rivers, but they were not that effective. Those who watched Vikings will recall how Ragnar bypassed them.

The final chapters cover the main campaigns, including the Great Assault, of Ragnar and Rollo fame. Paris was sacked twice, with much gold paid to the Vikings to buy them off. The later failures in Britain at the hands of Alfred meant a return to Francia in the wake of Charles the Bald's death and the inevitable power struggles. The suffixes of Frankish kings were not very complimentary - Charles the Fat, the Bald, the Simple. You do wonder if these were used when they were ruling! These later campaigns included attacks by mounted Vikings, which will add to the debate about Viking cavalry in army lists.

The final chapter includes a short analysis of both warrior types. I have clearly read too much Saxon monkish propaganda because the author argues that the Vikings’ pagan beliefs did not spur them to attack Christian religious centres. Although individual monks did die at the hands of the raiders, the majority appear to have escaped, leaving only those determined to sacrifice their lives. While settlement was not the aim of the early Viking raids, the only way for Frankish rulers to secure a long-term solution to the Viking menace was to offer the Northmen lordship of lands within the Frankish realm – hence Normandy.

As you would expect from Osprey, this book comes with excellent maps, colour plates and plenty of illustrations. I used to have a 15mm Carolingian Army, Mikes Models, if I recall. However, I must have sold them, so a decent 28mm range might tempt me back. 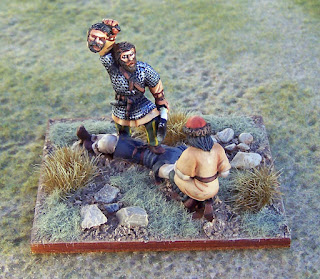