Against All Odds - Pakistan Air Force in 1971

I have long thought the Indo-Pakistan wars deserve more attention. Helion Books obviously believe the same as they keep feeding my interest! The latest is Air Commodore Kaiser Tufail's study of the Pakistan Air Force in the 1971 war. 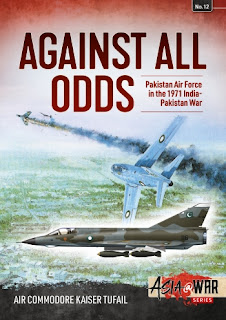 Obviously, a Pakistani air force officer will find it challenging to be objective, but there are other studies of the Indian Air Force in this series for balance.

The Pakistan Air Force (PAF) had performed well in the 1965 War, punching well above its weight. However, the Indian Air Force had remedied some of their problems and, as ever, would enter the war with a material advantage. The 1971 conflict was essentially about East Pakistan, or Bangladesh as it is now known. The geography alone created enormous problems for the PAF, and as other studies on the ground war have shown, the forward defence strategy was pretty optimistic, if not foolhardy.

The PAF had not stood still since 1965, although the US arms embargo created procurement challenges. Their biggest acquisition was 90 Shenyang F-6 fighters from China. This is the Chinese version of the Mig-19. They also wangled a way around the embargo by buying 90 ex-Luftwaffe F-86E (Sabre) jets. The most modern additions were 24 Mirage III from France. In total, they had 290 combat aircraft, of which 215 were operational.

The PAF's strategic and tactical problems were not limited to the geography of a country split in two. Even West Pakistan lacked depth, which meant every air base was within easy strike reach. The lack of comprehensive radar cover only added to this problem. They did attempt to defend these bases with the side effect of drawing IAF attacks rather than their exposed lines of communication. The PAF's primary mission remained to provide air cover for the army's thrust into India, its only way of distracting the Indian army from its invasion of East Pakistan.

The PAF flew a total of 288 offensive counter-air sorties. 81 sorties (28% of the effort) were unsuccessful as the armament could not be delivered for several reasons. Five aircraft were lost during the missions, two during the day and three at night, amounting to a campaign attrition rate of 1.7%, which was considered within acceptable limits. The PAF had very few assets to support the heavily outnumbered Pakistan Navy and even had to resort to converting civilian airliners. Overall the IAF lost 60 aircraft to the PAF 27. However, the IAF flew many more sorties and more challenging ones. 60% of the IAF losses were from AA fire. A quarter of the PAF losses were on the ground due to poor dispersal practice at air bases. The bottom line was that the IAF numbers counted, as it did in the land war.

This book gives the reader a detailed account of the air war at a strategic and operational level. Masses of data and profusely illustrated, including colour plates for the modeller and wargamer. An excellent read and everything you need to reproduce the conflict on the tabletop.